Role-playing hasn’t been kind to science fiction. Whether it be table top or video game, there just haven’t been too many successful adventures into deep space for fans of all things sci-fi (or SyFy apparently). The original Mass Effect managed to change this with its deep storyline and heavy focus on both dialogue and moral choices. Although there was definitely a line of division between those who loved the interactive novel approach and people who just thought the game was too talky, it’s hard to deny that Mass Effect was simply the best interactive science fiction around.

Well, until the sequel. Mass Effect 2 is a direct sequel of course, but more than that, Bioware set out to refine the gameplay of the originalâ€”beefing up its strengths and, frequently, eliminating what didn’t work. The result is nothing short of stunning.  The continuing saga of Commander Shepard is proving to be one of the most rewarding and interesting experiences in all of gaming, particularly because the game makes you feel as if you’re actually part of something epic. 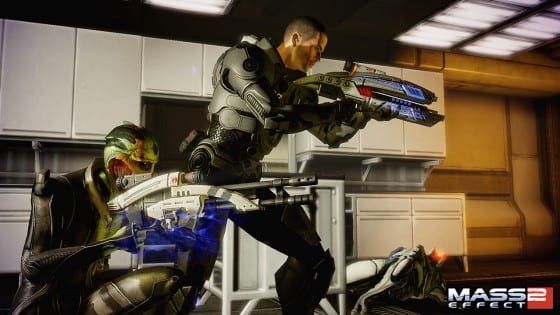 Importing your Commander Shepard from the first game and seeing the decisions you made affect the second part of the storyline is a superb gameplay mechanism. Further, the past and present decisions will eventually have significant consequences to the third part of the storyâ€”whenever Mass Effect 3 is released. It’s this sense of continuity that makes Mass Effect so damned engaging. Although the gameplay is as much shooting action as full-blown role-playing, the sheer amount of choices, characters, and situations to explore makes this series feel like a singular experience on your Xbox or PC.

Few titles bring together such a cohesive sense of action and actual role-playing in so seamless a fashion. Combat is much more intensive this time around, with simple, yet effective cover system and team mates that are more useful. You can easily adjust NPC situational behavior and use their special abilities on the fly, and both ally and enemy  AI react surprisingly well. This makes your computer-controlled cohorts far more useful allies during some of the harsh combat missions, and also makes the choice of team mates for individual missions a bit more important. 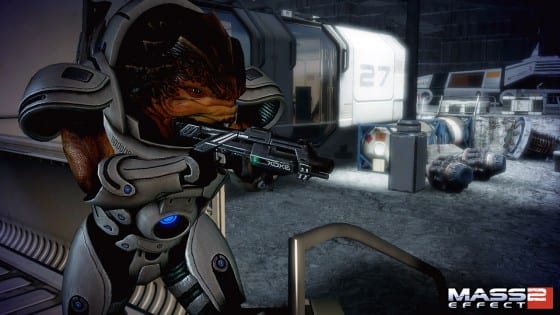 While action is a more focused effort this time, the RPG elements are very much in control. The stats and character developments have been streamlined, but you are always fully in control of how Shepard and his group advance. Dialogue choices in particular affect your morality, but the game allows you to be both a paragon (good) and a renegade (bad) in whatever measure you deem fit. Dialogue trees allow for both paths, and there are even chances to change the conversation mid-stream for a specific moral action that can have long-term consequences.

The set of characters that join Shepard are a motley bunch. You’ll track down some old friends, but mostly the cast is completely new. There’s  a surly, dangerous merc; a nearly psychotic biotic chick covered in tattoos and not much else; a hilarious alien scientist; a scarily sexy blue-skinned priestess of the law; a zen-like reptilian assassin, among others. Each has a distinct personality and personal mission that Shepard can complete to earn their trust. 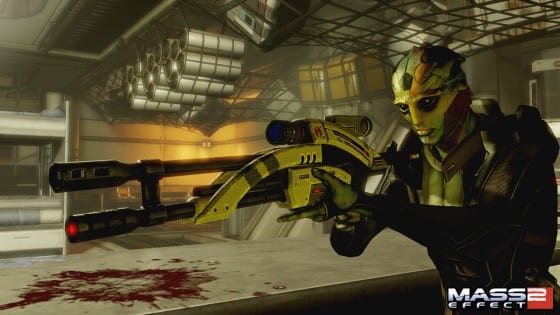 Although a couple of them will likely grate on you, causing you to hardly ever use them, the group is fascinating to talk to, learn about, and fight beside. Just the same, it would have been nice had the selection of possible team mates been both larger and more pliable. There’s no real options here except simply not seeking them all out. You can’t ditch characters you don’t want, you can only ignore them. Another issue is that transitioning from the original game leaves some real gapsâ€”particularly in the relationship department.

If Shepard found love in the original Mass Effect, don’t expect it to have much meaning this time around. This is especially strange given how important so many of your other choices turn out to be. The game clearly wants to foster Shepard into new relationship directions, but the option to be monogamous to your first love in some real way would have been nice. That said, it’s much harder to find romance in Mass Effect 2 than in the first game and especially in comparison to Dragon Age.

The other main complaint with the game is that it seems to go by much too quickly. Skilled players will blow through most of the side missions and the main story in around 30-35 hours. Gamers who take their time will likely make it to the 40 hour mark. It’s certainly a testament to the game’s addictiveness and expert design that 40 hours seems too short, but Mass Effect’s galaxy is a place that you’ll want to spend more time in.

While many chided Bioware’s Dragon Age for having middling graphics, that’s definitely not the case here. Mass Effect 2’s visuals are stunning. The level of detail of the characters is nearly movie quality, and the locations look much more varied and interesting this time around. The voice acting is universally excellent, the digital surround effects immersive, and the soundtrack is great.

Blast Factor: While Mass Effect 2 is an undeniably better game than the original, it’s important to stress that it’s the middle of a greater story. As such, it’s highly recommended that you play the original first and transfer that character over to the sequel. You’ll find a far richer and more rewarding experience that way. Either way, this is a truly great game. Epic, mature, and intelligent, Mass Effect 2 is just the sort of title that the industry needs to see more frequently. Where so many RPGs, especially those from Japan, are merely cookie-cutter copies of each other, this is a sci-fi adventure boldly going where few games have gone before.