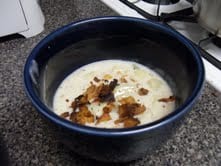 Mom avoided fat in recipes.  She replaced all red meat and pork with turkey.  The refrigerator was full of turkey bacon, turkey ham and turkey ground meat.  It’s amazing my brother, sister, and I did not sprout feathers and start clucking at the dinner table.  During the winter, when there was a cold spell, mom would buy real bacon and make potato soup.  She tried making it with turkey bacon, but the bacon fat made the soup.  It’s a tasty cure for those midwinter blues and takes less than an hour to make.

Fry the bacon in the pot the soup will be made in.  Remove the bacon.

Add to the pot of bacon fat:

Cook ingredients with a cup of water for 15 minutes.

Add to mixture in the pot. Heat until the mixture boils. Crumble the bacon over the soup and serve.