The Monopoly we know and (mostly) love, is getting major makeover.

To celebrate the game’s 75th Anniversary, Hasbro is streamlining the board game experience by making the game board circular and removing paper currency. 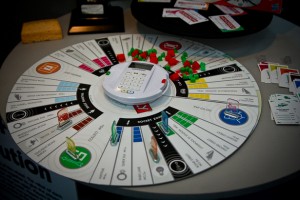 This will be fun?

Where did the money go? It’s still there, but you’ll have a credit card to keep track of every transaction, thus nullifying the ability to say “hey look over there” and steal a couple bills from your brother.

The game itself remains unchanged, meaning 4-hour sessions ending in the dead of night will still happen, but the genre “board game” might need to change to “bored game.”

The new, circular Monopoly will hit shelves later this year.