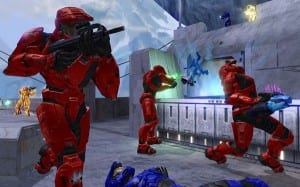 No more of this.

What’s that mean for you? If you are currently playing any original Xbox title, like Halo 2, on an original Xbox or an Xbox 360, come April, you won’t be able to play them online.

You’d think it’s about time, being 2010 and all, but Microsoft, as you could have guessed, seems to have a different motive.

“I wanted to let you know that on April 15, 2010 Microsoft will discontinue Xbox LIVE service for original Xbox consoles and games, including Xbox 1 games playable on Xbox 360. Our first step in this process will be to turn off auto-renewals for those members who only use Xbox LIVE on a v1 Xbox. While I can’t comment on the specifics, this change will allow us to continue evolving the LIVE service with new features and experiences that fully harness the power of Xbox 360 and the Xbox LIVE community. We did not make this decision lightly, but after careful consideration and review we realize that this decision will allow us unprecedented flexibility for future features.”

Sounds like doing away with LIVE for original Xbox games is making room for something….but what is it?