Apple unleashed its revolutionary new device today, the iPad, at a press conference at the Yerba Buena Center for the Arts Theater in San Francisco. Apple CEO Steve Jobs called the iPad,"our most advanced technology in a magical and revolutionary device, at an unbelievable price. We think this is going to be a really great combination." The tablet, which ranges in price from $499, $599, and $699 for the 16GB, 32GB, 64GB WIFI-only models respectively, to $629, $729, and $829 for the 16GB, 32GB, and 64GB 3G and WIFI models respectively, is what Apple perceives to be a third category product in between a smartphone and a laptop. 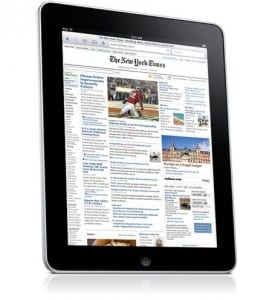 Aside from the ill-conceived name, which sounds closer to a feminine hygiene product than a state-of-the-art technological breakthrough (I personally favored the name iSlate), the iPad is downright cool. Only half an inch thick and weighing a pound and half, the 9.7-inch multitouch display is stunning and futuristic, looking like the iPhone on crack. There is also no correct way to hold the iPad; it adjusts itself to how the user is holding it. It runs on Apple’s own A4 chip, which Jobs said in the press conference is so fast it "screams." The iPad is a web-browser, an e-book reader (Apple unveiled an e-book application and store called iBooks), a gaming device, a productivity tool, an HD video player, a map and an e-mail client (complete with on-screen QWERTY keyboard and two pane interface). It can run apps out of the box in iPhone size or can be blown up to fill the iPad’s screen. Apple has also announced the iPad SDK platform, which will allow developers to create apps especially for the iPad. The iPad sports a 10-hour battery life, and can be on standby for more than a month. Jobs claimed in the conference that he could watch video on the iPad for an entire flight from San Francisco to Tokyo.

One noticeable feature missing is a camera, but many would gladly trade this feature for the ability to put any SIM card from any carrier into the iPad. Apple also introduced AT&T 3G plans for the iPad, starting at $14.99 for 250MB per month, or $29.99 for unlimited monthly usage. These plans are pre-paid, so iPad owners will not have to deal with the hassle of a contract, and owners can simply choose to use WIFI, especially if they have a WIFI card already.

One has to wonder if the low price is an effort to generate more revenue from content (iTunes store, App Store, and now the iBooks store). The iPad’s inception also affects two products specifically; the MacBook Air (which, with the iPad’s new keyboard dock, is now effectively dead) and e-book readers such as the Kindle and Nook. The iPad benefits from how closed the content on these e-book readers are in that the iPad can already do more than these products will ever be able to do. Some may point to the difference in price (the cheapest iPad is $499 and a Kindle is $259) as a reason that the Kindle and other e-book readers might still live on as is, but I think many people will spend the extra $240 for all the extra features.

Apple also introduced iWork for the iPad, a suite of productivity applications including Keynote and Pages, making the iPad a fully functional tool for anyone who needs to work on business or personal projects on the go.

However, the question remains, is there truly a need for a third category? As Jobs said in his closing remarks, "Do we have what it takes to establish a third category of products? An awesome product between the laptop and the smartphone. The bar is pretty high." Is Apple wondering this, possibly a reason for the iPad being priced at half what many pundits believed it would be? It is unfair to compare the iPad to netbooks, but isn’t a netbook essentially the middle ground between a phone and a laptop? And netbooks haven’t exactly taken off, because although more convenient, it’s money that the average consumer, especially in this economy, just doesn’t need to spend if they have a laptop. But then again, we’re talking about Apple. The company whose name is synonymous with technical innovation has released a new product that goes beyond the boundaries of any product on the market by far. No doubt, countless consumers will line up and gladly shell out $499 to $829 for their own iPad.