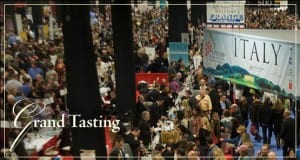 Winos flocked to the Seaport World Trade Center this weekend for a truly intoxicating time as the 2010 Boston Wine Expo took over town. Over 1,800 wines were available for sampling, along with mouth-watering bites to soak up that oh-so-addicting alcohol.

Experts were on hand to teach seminars such as Wine Spectator’s "Everything You Always Wanted to Know About Wine, but Were Afraid to Ask," and "The Wines of Loire Valley." The Culinary Theater boasted live demonstrations by some of Boston’s hottest chefs. It was truly heaven for all food and wine enthusiasts.

Blast’s favorite wine expert, Kevin Zraly, was also in the crowd. What featured vinos did he delight in the most? "Nada," the author of “Windows on the World Complete Wine Course,” admitted.

But, he corrected himself; one winery did stand out. Chateauneuf Du-Pape pairs perfectly with Dan Brown’s new thriller, “The Lost Symbol.” That’s right, this wine doesn’t need to be enjoyed with a light fish or a flank steak. Rather, Zraly recommended curling up with a good book when sipping this wine.

"To me, everything is about a story," he said. His new suggestions match a glass of wine with a book you can enjoy while drinking. The Lost Symbol is a good match here, he explained, because of something to do with the Pope. Frankly, the story was too complicated for us buzzed Blasters to followâ€¦but we were willing to taste test the wine (shocking!). The verdict? Just as we suspected, Zraly is The Man.

But he wasn’t the only celeb wine-ing away at the expo. Believe it or not, Blast was lucky enough to chat with Germany’s very own Wine Queen (she was happy to correct us when we mistakenly referred to her as a "Princess").

The Wine Queen has been a German tradition for 50 years. Each of the 13 wine regions has one. Anna Saum was in Boston after beating out hundreds of hopefuls for the title of "Frankische Weinkonigin 2009/2010."

She travels the world drinking wine and looking beautiful, and she does it way better than Paris Hilton. She’s beautiful, smart, funny and charming — all qualities the Wine Queen must possess. When we practically forced her to let us take a picture, she didn’t forget her royal duties for a second. "Let me get my crown," she said.

We found some favorites and learned a bit about the local talent, but you’ll have to stay tuned for all that. February’s Put A Cork In It wine column will be full of expo info, and special articles are to come. For now, sip slowly and dream about being a Wine King or Queen. "It’s a pretty good job," Saum said.