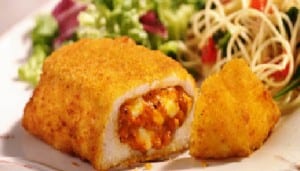 We did more than just drink at 11 o’clock in the morning at the 2010 Boston Wine Expo. We pigged out on free food and cheese too.

For once, there’s truth in advertising.

Now, it’s hard NOT to like food, any food, after you’ve been sampling some three or four dozen types of wine, including several delectable Portos. So we can’t just jump in and say “Barber frozen stuffed chicken entrees are awesome.”

Cause, like, they were. Awesome. They were really, really good.

The sad thing about lots of the foods and wines we tried at the 2010 Boston Wine Expo was the fact that many of them just aren’t available in New England yet — that’s why they’re at the expo in the first place.

Barber, a Maine-based company, is lucky. You can buy their food at any local Stop & Shop or Star Market/Shaws here in the Boston area.

So I bought a few packages of broccoli and cheese and chicken parm entrees.

And therefore, after sampling Barber Foods both tipsyly and soberly, I can now unequivocally say with a degree of certainly that Barber frozen stuffed chicken entrees are awesome.

They don’t taste like you might expect a frozen dinner entree to taste. They don’t taste processed and cheap. The breading is crunchy, the chicken is white and fresh, not mealy as many frozen dinners tend to be. The stuffing is fresh and fragrant. I was honestly impressed, because frozen dinner has such a horrible reputation for cheapness and low quality. I guess they’ve saved both dinner and their genre.

Barber also makes an assortment of chicken tenders and nuggets. Barber’s stuffed chicken sells for $4.99 for a 2-pack, or $9.99 for a 4-pack.

We have a $1 off coupon for the first Blast registered user who shares either their Boston Wine Expo story or their favorite chicken dinner story in the comments section.

Erica J. Marcus, of the Blast staff, contributed to this report by eating.