Somewhere between completely loathing the difficulty of the last level and finishing the game, I finally "got" Osmos. You see, Osmos was able to do what no other zen (or ambient) game has actually made me doâ€”chill out. Osmos has made me contemplate the very essence of human existence, evolution, consumption, and so much more. The difficulty of Osmos’ later levels was very frustrating at first, and often caused me to quit the game rather angrily; I was approaching Osmos like I would any other game, swiftly trying to complete all given goals in the pursuit of completion. Once I started approaching Osmos as not a game, but as an experience, I was able to fully appreciate the genius behind it.

Osmos is an indie game developed by Hemisphere Games, a startup development studio of six contributors. In Osmos, you control an organic "mote", which is essentially a one-celled organism with hopes of one day devouring everything around it. There are two important laws of how things work in the world of Osmos. Firstly, bigger things consume (and thus gain the volume of) smaller things, but never the other way around. Secondly, in order to accelerate forward, an object must expel some of its own mass behind it; much like Newton’s third law, every action has an equal and opposite reaction. 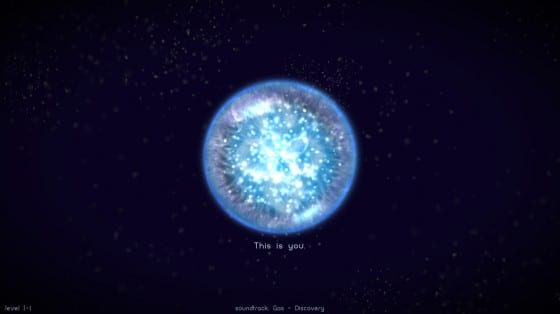 With a few exceptions, the goal in Osmos is to "become the biggest”. In order to do this, you must hunt down smaller motes and dodge bigger ones. In order to hunt the smaller motes down, you must propel yourself by ejecting chunks of your own mass behind you. This dynamic alone is what can make the game so challenging, as an edible mote can quickly become your predator after you expel the mass necessary to chase it down in the first place. Even worse, perhaps you’ll see two tasty motes ahead, both a bit smaller than yourself; while on your way to snatch them both up, they collide and one devours the other entirely, suddenly you have no choice but to flee or die. Though most motes are just dummy organisms without the ability to think or move at will, if you wait too long to hunt down prey these dummy organisms will eat each other up and make it impossible for you to win. Things get a bit more complicated when you encounter more advanced organisms like the Biophobe. The Biophobe has the ability to sense danger, and will avoid being eaten by you at all costs. The more advanced organisms are skilled hunters, and will quickly become very large if the player does not act fast. 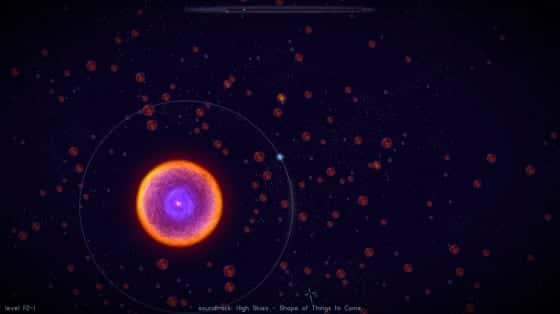 Every moment is Osmos is beautiful.

Once you pass the initial tutorial segment, you are given a choice of three paths to follow in the game. Following one path will have you facing off against other sentient organisms (like the Biophobe) and testing your instinctual survival skills. Ruthless consumption and hunting is the only way to survive this part of Osmos, bringing Darwin’s concept of survival of the fittest to mind. The second path contains some of the most head-scratching portions of Osmos. Some of the levels on the second path put you into a big space with many other motes just floating around, like previously mentioned, these levels require speed and accuracy to win. Later on you will encounter "impasse" levels which are incredibly cramped with huge motes sitting in your way. These impasse levels require players to employ creative strategies, and will take a lot of thought and patience to win. Finally, there is the third path which focuses on physics. This third path introduces "attractors" and "repulsors". Repulsors simply push away from any other mote, and can be tricky to hunt down. Attractors act as potent gravity wells which will suck in and devour any mote smaller than itself. Some levels will start off with you and hundreds of other motes orbiting one attractor; as usual, your goal will be to "become the biggest", or possibly "absorb the attractor", something which will destroy the gravitational balance and send the remaining motes into the distance. These orbiting levels become more advanced later on, and will require plenty of patience and skill to perfect.

If patience really isn’t your thing, Osmos features the ability to manipulate time. With the press of a button, you can instantly slow down or speed up time. This can make long trips from one side of an attractor to another fly by, while making precision movements in impasse levels much easier to pull off. Time manipulation even has the neat side effect of eerily speeding up or slowing down the game’s soundtrack. 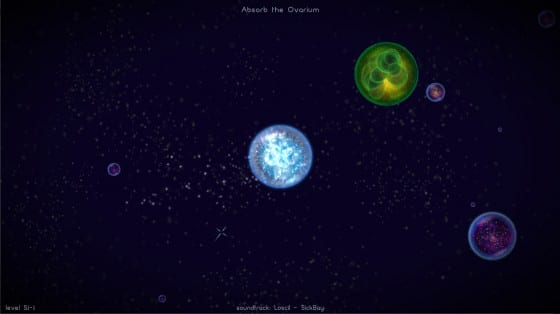 Sentient motes are your prime target.

Osmos features ambient music from various artists. In most cases, the tunes match the gameplay perfectly. The music and sounds work together to make a very chilled-out environment, and will even dynamically change in certain levels. Occasionally, however, the calming music will directly contradict with the frantic competition between you and another mote. Graphically, Osmos is fantastic and minimalist. The color palette helps drive home the soothing essence of the game, while the swirling and glowing of the motes can be absolutely entrancing.

Blast Factor: Whether it’s relaxing meditation or challenging gameplay you seek, Osmos has you covered. Hemisphere Games has produced a zen gaming experience unmatched by any developer before it. For the price, Osmos is the perfect end to a long work day or stressful gaming session.

Osmos is available for PC, Mac, and Linux for $10.00, it can be downloaded directly from Hemisphere Games, Steam, Direct2Drive, or Games for Windows. A copy of this game was purchased for reviewing purposes.