Some say Earth was created in seven days…

…How many will it take to save it?

The folks at Square Enix aim to creatively answer that question with their new release 0 Day Attack On Earth.  In this un-railed Raiden-esque title, players must defeat a horde of aliens in 3 different major cities around the globe before everything is left in rubble.  At your disposal: a large variety of customizable aircrafts including jets, planes and helicopters; each complete with their own unique strengths, weaknesses and power-ups. 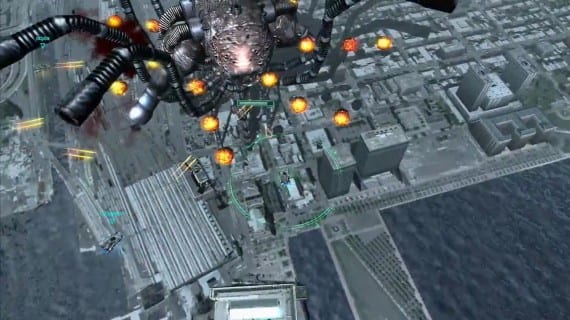 Each level in 0 Day Attack On Earth is represented by a day in which the squid-like, seemingly half-organic half-machine aliens are attempting to take over one of the cities.  In these levels, players will not only have to take out the massive hostiles, but they will have to halt the destruction within a certain amount of time.  Along with the most dangerous of the enemies, which are complete with fire-fuel ammunition and uber-quick tentacles, are slightly small and slightly less hazardous foes.  While these enemies are considerably less treacherous, the loot they drop (in the form of translucent green cubes and balls) can help you regenerate health or gain powerful upgrades for your ship (including shields, heat-seeking missiles and multiple-stream blasts).  Players will have to decide how much time they will dedicate to upgrading their ship and how much they will spend actually trying to clear the level.

Visually, 0 Day Attack On Earth looks pretty dang good.  Similar to Raiden, which this game seems to draw a lot of inspiration, 0 Day Attack On Earth features both 2-demensional backdrops with 3-demensional character models.  However, unlike Raiden, 0 Day Attack On Earth is unrailed and contains fairly large maps (a detail that I loved).  Background settings are vast, but lackluster in aesthetics.  While indeed the background images are 2D, it seems that there was no major effort to make the buildings and parks pop out or look interesting.  Sure, they had a few buildings enter the 3D realm, but it was mostly a miss for me.  Conversely, the enemies look very good in the game with their accompanying tentacle motion, flame-based weaponry and postmortem explosions.   Furthermore, the gameplay in 0 Day Attack On Earth is pleasantly intense at peak moments of chaos. 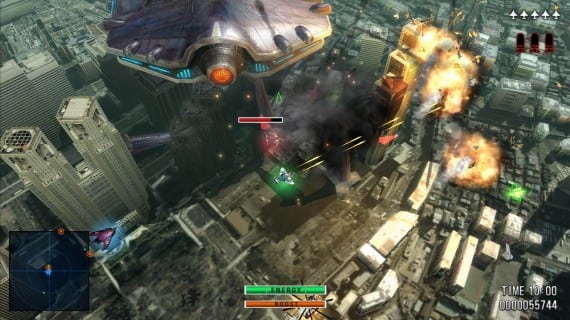 Also, the camaraderie theme continues within the gameplay.  Certain enemies will attach to your ship during parts of the campaign that one will not be able to save themselves from.  Instead, players will need to rely on their friends shoot off these attached foes and continue the purging of the aliens.  In fact, the camaraderie is pushed so persistently that, when you save a teammate, two voice bubbles pop up from the ships that fall victim and perform the rescue that say "Welcome!" and "Thanks!" 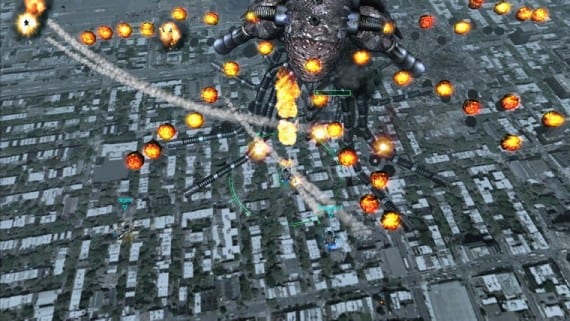 The controls in 0 Day Attack On Earth are heavily focused on the two joysticks on the Xbox 360 controller.  The left stick is used primarily for steering and forward motion while the left stick, when pointed in an outward position, is used a firing control, replacing both of the triggers on the controller which would be the most intuitive for that function.  Needless to say, for those who are not well versed in these controls will have a bit of learning to do.  Luckily, even the most challenge gamers (myself included) will not take much time to adapt to these odd controls.