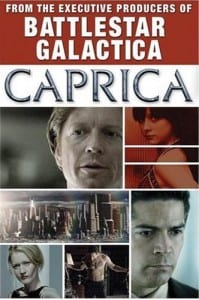 Where did we go wrong?

Prophetic beginning in a cacophonous manner to illustrate that what we think was the cause of the future human near-genocide off the face of the planets, might not be as simple as we thought. Taking place 58 years Before The Fall, CAPRICA follows the Greystone and Adama families as they plan to take destiny into their own hands. From the start of the episode we see that all is as normal as can be; for a family that has everything, it seems something is amiss.

In this way, Caprica takes the Viper and flies. With absolutely no back story, no prologue, many viewers new to the franchise may find themselves asking whether this even takes place on earth. Fans of the BSG universe will analyze this episode from the very first scenes. Searching for clues or cameos, or anything that will give them an answer. We as viewers, fans and newcomers alike, will try to reverse engineer a genocide and try to find the impetus that began all that we know.

An attack on the local train leads to the involvement of two separate yet equally important families. The Greystone family loses a daughter, and the Adama family loses a mother and a daughter. The two fathers are then joined through grief in an effort to communicate their loss, and find a way to move on, or in the case of Daniel, to fix it. We then see how two totally different approaches to the loss of a loved one is dealt with. One through scientific (advancement), and one through humanistic (tradition).

As Daniel Greystone, Eric Stoltz, is a perfect match. An adult nerd who keeps struggling and tries to find the answers to what seemingly are just complex puzzles. His delivery of his lines are spot on with an air of calm, and a cool honest inquiry into the world around him. While very hard pressed to show emotion, his awe at technology is quite realistic. The way he presents quite deep psychological themes, and metaphysical ideas works on a natural level, without sounding contrived, but a light touch of arrogance. He is endearing, but altogether despicable and morally questionable in his ways. You want him to find solace, but he’s dedicated in finding it in his own manner.

Esai Morales as Joseph Adama is just as solid. His family values upheld even in the light of an attack on them. He conveys a warmth that can quickly turn cold, or even passionate. Make no mistake, Joseph Adama is driven by his heart, in opposition to Daniel’s cerebral approaches. In this pilot we see his loyalty extends to the realm of the traditions embedded in off-world dealings, in his home-world of Tauron. Comprise will seemingly break apart a normal man, but Joseph seems adept at handling even the most crucial of choices when it comes to matter of loyalty and the heart.

Paula Malcomson plays the distant mother and friendly wife, Amanda Greystone. Personally, I think she plays the role quite realistically. While obviously not given much screen time, she gives each of her scenes more depth for the world around Daniel and Joseph. Without her presence and personal emotional displays, I wouldn’t care about, nor believe Caprica as anything more than a one-dimensional city.
Magda Apanowicz plays Lacy Rand, Zoe’s best friend. While her character basically serves as a platform for much of Zoe’s connection to the real world, Magda allows her youth to shine through to show how naive and yet understanding Lacy is. Even if not much screen time is given to her in this episode, she is integral to the main story, as seen in the end of the pilot.

Finally, we have Zoe Greystone, played by Alessandra Torresani. Alessandra can convey so much, and yet leave you feeling as if you truly are listening to a teenager. Theoretical computer terminology flow from her without a feeling of unbelievability. She actually presents emotional, technical, and expository monologues with riveting proficiency. Which is needed on science-fiction. Plus her demeanor at times of thoughtfulness isn’t contrived nor does it leave me with a ‘she-wouldn’t-do-that’ thought at all.

At the time of this writing some of you have seen the CAPRICA movie on DVD/Blu-Ray.

As far as the visuals and audio of the show go, they’re top notch. We have the similar detailed sets that make a living room of the Greystone family seem as barren and character focused as the hanger bay of the Galactica. Cinematography is headed by Stephen McNutt, whom worked on many BSG episodes. So you’ll see similar lighting styles and angles and even that slight bobble (aka handy-cam like) technique to present the sets and even outdoor locations with a realistic framing. Hell, even Lee Jeffery, a professional stand-in, comes over from the BSG series.

The music is composed by Bear McCreary. So you know you’re in for an aural presentation of ear soothing or rumbling proportions. I enjoy that some of the crew that worked on BSG are now working on Caprica.

But I’m also glad that Caprica is no Battlestar Galactica.This means that you won’t be seeing starships go pew-pew, or even any feeling of military duty. This is purely a civilian point of view. Regular people dealing with extraordinary events. Asking much of them, and not letting them rest to even have a chance to absorb what is happening to them. And perhaps that lack of self-reflection is what began to bring down not only Caprica, but the entire Twelve Colonies. In any case, this is only the beginning. Where we have a chance to find out, what went wrong.