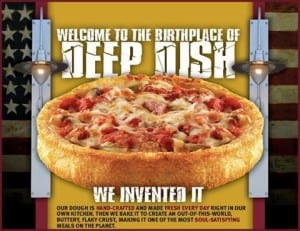 I knew “Pizzeria Uno” was a better name than “Uno Chicago Grill.”

The Boston Globe reports today that Uno Restaurant Holdings Corp., a Boston-based company with about 30 restaurants in Massachusetts and 179 nationwide, is filed for Chapter 11 bankruptcy protection.

That’s right, they’re not based in Chicago.

The company closed six of its locations but vows that the bankruptcy protection is only a minor setback and that customers won’t notice any differences in their restaurants, the Globe reported.

In a statement released today, the company called its Chapter 11 filing “pre-arranged” to help the company restructure debt.

“The steps we’ve taken represent the culmination of many months of work on the part of the Company, its current owners and the Noteholder Group (“the Noteholder Group”) made up of members comprising a majority of the Company’s outstanding Notes,” said Frank Guidara, President and CEO of Uno, in the statement. “The Uno brand is strong; it’s the balance sheet that needs fixing.”