Ever wonder what would happen if the apocalypse just happened to start early? Well, pick up Darksiders for your Xbox 360 or Playstation 3 and you can start finding out. Vigil Games and THQs Darksiders is an excellent addition to any gaming library, and starts gaming in 2010 with a whole lot of blood and gore. And for those of you who just enjoy slapping around a dragon while you hold him down with your sword through his claw, Darksiders is sure to bring a pleasant experience.

For those who have played SCE Studios God of War, Darksiders will definitely have an air of familiarity to it. Combining button-combo, action style game play with classic â€˜Legend-of-Zelda’-ish platforming, Darksiders is an impressive homage to gaming past and present. You start the game as War, one of the four horsemen of the apocalypse. The stage of the game is Earth, where mankind live unaware of the ancient battle between Heaven and Hell that has been raging for centuries. The Horsemen are charged as keepers of the balance of the three worlds. In present day, Armageddon begins and angels and demons descend upon Earth to wage battle once more. Armed with your sword, Chaoseater and a badass attitude, you dive headfirst into the action, destroying both angel and demon alike.

The only setback isâ€¦ well, the apocalypse wasn’t supposed to happen quite yet.  War is brought before the Charred Council to accept his punishment for supposedly starting the apocalypse. Instead, the Council agrees to let War attempt to seek his revenge on the real parties responsible. To make sure War keeps his end of the bargain, they assign to him The Watcher (voiced by none other than Mark Hamill!), a demon who has the ability to destroy War if he happens to be lead astray. Thus begins your quest to seek the Destroyer, main bad dude extraordinaire. Upon War’s return to Earth, he discovers that 100 years have now passed, and with the help of some unlikely allies, he begins his march on the Black Tower. 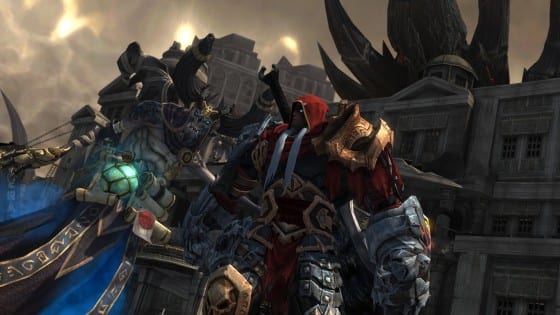 War is made for fighting, and has an arsenal of weapons to prove it. Along with your blade, you receive several amazing weapons throughout the course of the game, and as if that wasn’t enough, there are plenty more to be had at the store, run by a demon named Vugrim. Vulgrim also provides War with special abilities, new attacks, and general items that can level up his health, wrath meter, and his already obtained attacks. The combat system is fairly simple, and definitely easily learned. Button-combos and timing control turn War into a slashing, demon/angel-killing machine. After lowering enemies health to a certain point, a finisher attack becomes available, all of which are unique to the type of enemy you happen to be fighting.

Along with your normal attacks, War also has special attacks, and a Chaos form which turns him into an invincible god-like entity for a short time. War can even pick up objects in the environment and throw them at his enemies, causing major damage. Your reward for killing monsters are three types of orbs: health orbs, wrath orbs, and soul orbs. Wrath is the meter for War’s special attacks, soul orbs are bargaining chips at the local shop, and health orbs restore any damage that War takes during battle. If by some random chance War is killed in battle, Darksiders incorporates a check-point system that allows players to return to the game without too much of a hassle or back-tracking. 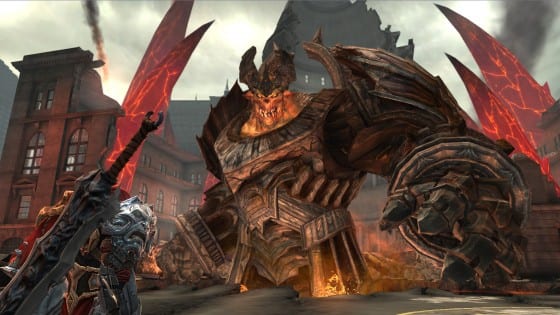 There is much to be discovered as you work your way through the game. Treasure chests are plentiful, most containing health, wrath, or soul orbs, but there are also other artifacts and weapons to be found. The level design creates a challenging puzzle to work though, mostly involving tools that War receives along the way, including a grappling tool, the ability to slow time, and even the creation of portals to get from one place to another. The levels go from being fairly easy to maneuver to a time-consuming challenge. The variety of ways War gets around is fairly impressive as well; you could be climbing up a wall and clinging to pipes and suddenly be underwater and swimming through underground tunnels. Sometimes, the level design gets to be a bit overwhelming, and in the later parts of the game, it is easy to get turned around. Fortunately, there is normally a way to get back to where you started, even if it may take a little while to find it.

Character design in this game is one of its best focus points. War himself is almost bland compared to some monsters that you will meet in this game, including an extremely devilish, huge winged demon, Samael. Visually appealing, the graphics are smooth and colorful creating some of the most interesting backgrounds to a game that have been seen in the next-gen console lineup. Monster design is diverse, and the game is rampant with zombies, demons, angels, and giant boss battles that put other bosses to shame. Darksiders is a violent, beat-em-up, bloody game that will delight gamers, treating them to a feast of gore.

Blast Factor: As a whole, Darksiders uses a lot of tried-and-true elements that we have seen before to create a new experience for gamers. Although nothing revolutionary happens mechanically in this game, it stands tall as a beautiful demonstration of great game play combined with gorgeous graphics and a likeable story. Unless you spend hours and hours gaining souls to use at the shop, your first-playthrough will probably not be enough to unlock everything the game has to offer, making Darksiders a fine example of a game with replay value. Although sadly the actual story doesn’t quite pop out during the game, the voice-acting, level design, and polished combat system make Darksiders a good show and definitely worth taking a closer look at.

Darksiders is available on the Playstation 3 and Xbox 360, and retails for $59.99. A copy of this game was given to us by the publisher for reviewing purposes.