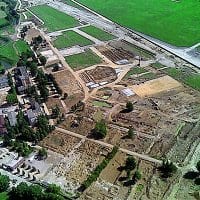 ROME — Last June, archaeological investigations planned by the Archaeological Heritage Department began in Dal Molin in the Veneto Region, with active cooperation from the United States Army Garrison Vicenza, which was responsible for the financial aspects of this operation.

These preliminary archaeological investigations were focused at providing new information to be added to the overall existing archaeological knowledge of an area neighboring on an ancient urban center.

Last February’s discovery happened by chance, observing the photographs in a book written in 2005 by a Major in the Corps of Engineers, which showed that there were Roman ruins inside the Dal Molin airport.

Specifically, the base of an ancient column and the remains of an ancient Roman aqueduct were found, the ruins of which are still visible in Lobia. A preliminary report on the discovery has been recently filed. The result was that, in addition to the ruins of the aqueduct, there are also traces of a canal, of houses and of 18th Century floors and above all the unexpected and surprising discovery of a Neolithic settlement.

Will this archaeological discovery stop work on the U.S. base at Dal Molin since, theoretically at least, there are enough laws protecting the site?