It’s no secret revenues were down for most video game companies in 2009, but what about The Big Three — Nintendo, Sony, and Microsoft?

Looks like they saw red last year, too, and reported revenue losses of $200 million to over $1 billion.

Numbers are fine and dandy to read, but if college taught me anything, it’s that graphs get the point across exactly 1.5 million times better. 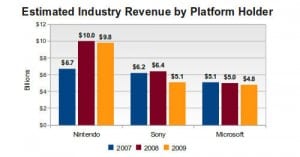 Money: It's been lost.