The PixelJunk series is king of the PlayStation Network.  With three groundbreaking titles released in less than two years, Q-Games has surprised players and critics again and again with new concepts and an unparalleled level of polish while simultaneously proving that 2D gaming is far from dead.  Over a year after the first three games’ releases, PixelJunk Shooter arrives, and it is nothing short of spectacular.

Don’t be fooled by the simple name "Shooter", as it’s anything but a typical shoot-em-up.  Though Shooter depends on standard “shmup” gameplay for survival, the game really shines as a shooter-platformer hybrid loaded with elemental puzzles and an excellent fluid dynamics engine.

Shooter, unlike previous PixelJunk games, starts off with a simple plot: contact with a lucrative mining complex on a distant planet has been lost, and you are sent to investigate the situation.  Right away your ship dives deep into beautiful caverns and mines, full of flowing water, boiling lava, deadly creatures, and survivors desperately needing your help. 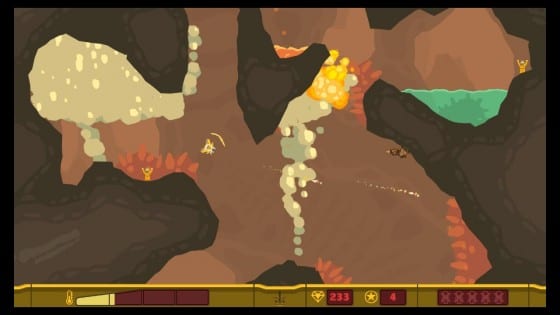 The goal of the game is simple enough:  get through every area of a level by saving all of the survivors in that area.  Collecting survivors gives you points, while allowing too many survivors in one level to die will force you to restart the level from scratch.  Get too hot, either by proximity to lava or by sustaining enemy fire, and you’ll have to restart from the last checkpoint. 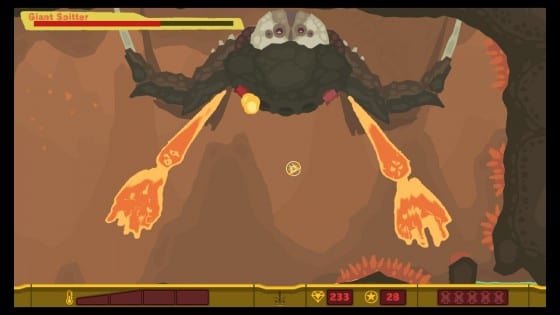 Sadly, you can't flip the crab over for massive damage

The real thing that sets Shooter apart is its outstanding fluid dynamics engine.  Water, lava, and various other substances splash and flow realistically, and interact with one another in interesting ways.  For example, a pool of hot lava can be cooled with water to form soft rock, which can then be blown apart or carved through to form a path that previously did not exist.  Later on, you will encounter flammable gas, which can be ignited with lava to cause a wave of explosions to ripple through the caverns.  You will encounter other elements with which you can interact, but those are best left undisclosed until you discover them yourself.  Most of the puzzles you will encounter in Shooter will involve skillful manipulation of these elements to find a way through existing impasses.

To help you on your way, you will come across giant sponges, water bombs, lasers, mirrors, fountains, and more.  You’ll find special power suits that give you powerful new abilities that will completely change the way you play the game– again, these are best left undisclosed.  So while shooting things is the way to stay alive, mastering the elements is what you need to win. 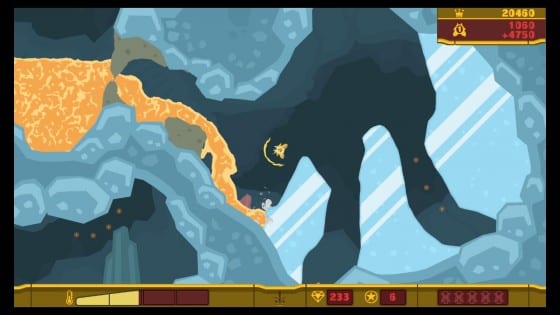 It's getting hot in here.

Among the most outstanding aspects of the game are the boss battles.  At the end of each act (there are three acts in total, with five levels each), you will come to a classic boss fight.  Each boss is completely different from the last, and will put your skills as a pilot to the test.  These bosses combine the old-school trial and error/dodge all the bullets mentality of past shooters with the new functionality of a fluid dynamics engine and a high-tech ship.  If there was any one thing that really surprised this reviewer about PixelJunk shooter, it was how fun and exciting the boss battles are.

Once you beat all three of the bosses, you’ll notice PixelJunk Shooter’s biggest shortcomingâ€”its length. When you beat the game in the scant few hours it takes, you’ll be left wanting so much more.  For the PSN game’s cost, the length isn’t too awful. Most of your time playing the game is spent learning new concepts, so when the ending comes with a “To Be Continued”, you might just feel a bit ripped off.  Fortunately, there are still plenty of gems and survivors to collect in each level, so you may still want to go back and play through a second or even third time.  If high score hunting is for you, you can also enable a “score attack” mode which will show your cumulative score as you progress through each area. This adds a whole new level of competitiveness to the game, and with two players the added communication required makes the game that much more intense.

That highlights another important pointâ€”like all PixelJunk games to date, Shooter features fantastic offline multiplayer functionality.  Anywhere through the story, a second player can join in on the action to help with the challenges and enemies.  While the haunting quietness and steady discovery of the singleplayer mode can be very calming, two player mode brings a certain social, semi-casual fun unseen in most of modern gaming: just like PixelJunk Monsters and Eden, Shooter is a great couples game. 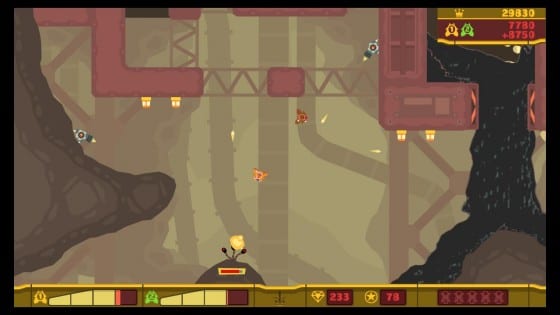 Q-Games always makes sure to use the features of the PS3 to their fullest extent. Like previous games, YouTube recording and custom soundtrack capabilities are built in.  Navigating to the Photos section of the XMB reveals built-in screenshot functionality (all the screenshots in this review were taken using it).  Online leaderboards let you compare your scores with friends and the rest of the world, and the game’s remote play functionality is unmatched, presenting a new control scheme perfect for the PSP.

Blast Factor: PixelJunk Shooter is presented beautifully with vibrant, elegant vector art and a haunting soundtrack that builds up at just the right moments.  Q-Games perfectly blends challenge and fun in its most epic PixelJunk game to date.  PixelJunk Shooter can really appeal to anybody, and is great for short and long sessions alike.  For the price, PixelJunk Shooter is a great deal.