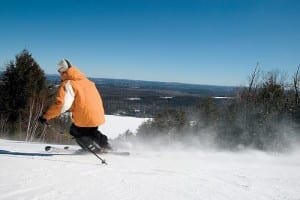 Winter is in full swing, and if you’re anything like me you’re likely counting down the days until you can head outside without looking like the Michelin Man.

However, the one thing that makes these cold months bearable (at least for me) is the abundance of winter sports. New to the area, or maybe you’re simply interested in checking out a new winter sport? Here’s a little something to get you started.

Cross Country Skiing: You’ll see people cross country skiing on the Esplanade after any major snow storm, but for more assured conditions head to the Weston Ski Track (a convenient 15 minute drive from downtown) for groomed trails, rentals and lessons. Bored after work? Give night skiing a try. Not so sure on your skis? Snowshoe rentals are also available.

Ice Skating: Opportunities abound in the city. Each winter, the Frog Pond on Boston Common is transformed into an outdoor skating rink. Billed as the city’s "coolest gathering spot" it’s open for public skating everyday and offers rentals. The Skating Club of Boston in Allston also offers public skate sessions on Saturday and Tuesday afternoons, as well as rentals and lessons. And Bay State Skating School has a number of locations, including in West Roxbury, Cleveland Circle and Southie. The Massachusetts’ Department of Recreation and Conservation also runs a number of skating rinks across the city. Go here for locations and public skate hours.

Hockey: Looking to fulfill your own Bruins fantasy? Check out the Greater Boston Hockey League for information on joining a rec team. Or check to see if your local skating rink offers a neighborhood league.

Downhill Skiing: With great skiing just a quick drive away, there’s no reason not to gather up a few friends and head north for a day or a weekend on the slopes. No car? No problem. Several companies run bus services that leave from the city. The Boston Ski and Sports Club offers day and weekend trips to some of the best spots in New England. At $79 for a bus ride and lift ticket, these trips are a veritable bargain. Also, New England Action Sports does slightly cheaper weekday trips that leave from South Station. If you’re just starting out, you might want to get a few lessons under your belt before heading to the big stuff. Consider a trip to Blue Hills Ski Area in Canton, which offers weekend and evening lessons.

Snow Tubing: Hankering to relive your childhood sledding days? Head to Nashoba Valley or Amesbury Sports Park. Whirling down groomed slopes will bring that same old rush, minus the grueling climb afterward (yes, there’s a lift to carry you up).