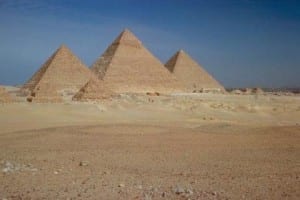 ROME — Recent news reveals that only 12.5 miles from Cairo, near the large Giza pyramids, mud and brick tombs have been discovered, said to be the burial places of those who died during construction and dating back to the Fourth Dynasty.

According to the leader of the team of Egyptian archaeologists, Zahi Hawass, the discovery of these new tombs proves that the pyramids were not built by slaves but by free workers.

In fact, had they been slaves, they would have been buried in common graves or loculi, and not real tombs like the ones discovered in Giza. According to Hawass, this is a “sensational discovery, that will throw new light on the construction of these extraordinary monuments of humankind.”

This may appear to be an umpteenth historical revision, but for some time many Egyptologists have supported this theory that rejects accounts by Herodotus in "The Histories."

Zahi Hawass has emphasized that these tombs were built next to the king’s pyramid, indicating that those buried there were not slaves. Had they been slaves their tombs would never have been built close to those of kings.

A series of clues and finds are said to prove irrefutably that expert and paid workers built the pyramids.