Many games feature a cooperative component, but the Army of Two franchise lives and breathes on it. The original Army of Two gave birth to two gun-toting, high-fiving mercenary heroes Tyson Rios and Elliot Salem. The sequel, two years later, expands upon the ideas of the first, adds an intriguing morality system, and vaults into an over-the-top action sphere that gets a tad excessive at times.

The premise of 40th Day is simple. You and your partner are guns-for-hire in the war-torn city of Shanghai. The entire game takes place over the course of one convoluted, action-packed, and bloody day and if you want to make it out alive you’ll need to work together.

What struck me first, and hardest, about 4th Day, was the game’s new and thought-provoking morality mechanic. This intriguing addition to the game allows you and your partner to decide what to do in a morally-ambiguous situation. 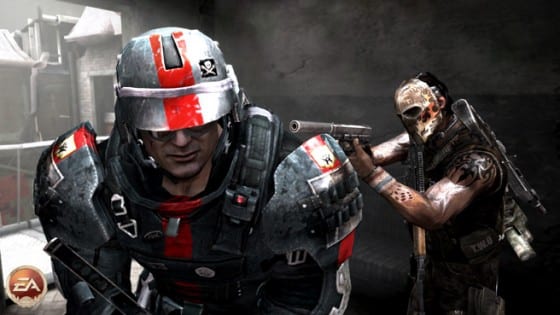 Has your skull met my bullet yet?

Do you allow a child (your mission is to protect him), to vault from cover and attempt to recover a sniper rifle for your benefit, knowing full well he may die in the attempt? Do you sit back and watch as another mercenary you encounter, rapes an already bruised and beaten woman, or do you kill him on the spot? 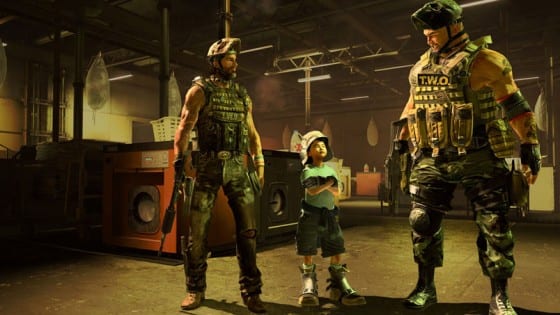 When you make a decision, the cutscene plays out, and you’re shown a detailed animated cinematic detailing the fate of the individual you saved, or what happened as a result of killing who you did.

These types of encounters happen in every chapter and their ramifications can be harsh or helpful later down the road. For example, the hospital patients I saved in an early chapter, came to my aid in the final chapter, clearly making my trudge through an onslaught of foes very much easier. 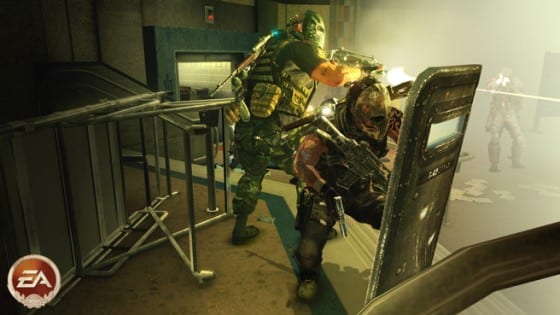 There are also fewer drastic moral choices littered throughout the story. Enter a room, scout a bad guy, and take him hostage. Now you can either tie him down or pop him in the crown and watch his brain-matter spew against the wall. Do mercenaries have morals and consciences? You decide! 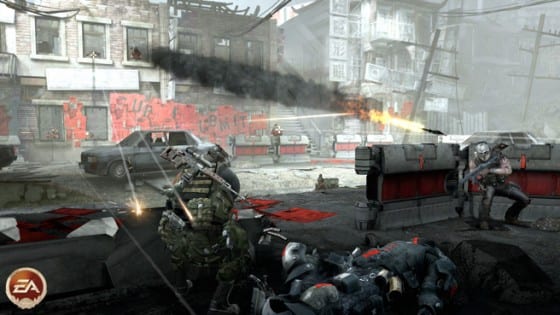 Cover can be so useful

Shanghai is a city besieged. The locale is constantly changing. Airplanes crash into buildings. Skyscrapers topple to the ground, and ceilings seem to be flawed in design, as they’re always crumbling! These often drastic changes to the world around you makes the level design seem that much more impressive.

However, as great as these destructive cinematic scenes may seem on paper, in the game they don’t work out terribly well. A game based on destruction should have an engine not only capable but powerful enough to handle all that’s going on, and in 40th Day, this sadly isn’t the case. When I think of games with destruction as a focal point only one game comes to mind, 2008’s Red Faction Guerilla. In that game destruction happened on the fly, not just in cutscenes and looked superb. In 40th Day, these scenes happen almost exclusively in cinematics and they still pale in comparison to Guerrilla. Ouch. 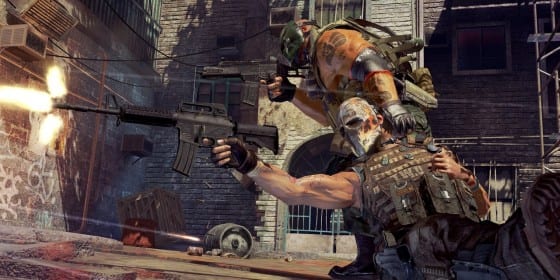 Finding and using cover in 40th Day is integral to surviving and thankfully the system on which it works, does a darn good job being not broken. Simply push the right stick toward any cover you’re near and you’ll duck into it and another click of the analog stick changes the over-the-shoulder perspective.

Tactical warfare is also stressed in 40th Day. Many scenes require either Salem or Rios to draw the fire of enemy combatants with a very useful "Aggro" system, while the other flanks around a corner, down a staircase, or through a window, to rain fire down on the bad guys. This system works when playing with an AI-controlled partner, but is much more fun and effective with a human gun-toter, as strategy can be actually spoken, instead of by a click of the directional pad.

What’s more, the masks Salem and Rios wear are good for more than keeping hot lead from entering your eye sockets. These face-plates are also GPS devices that show a green-arrow pointing to your next target as well as enemy rank, so you know who to take out first. Does this mechanic work? Sure. But it just doesn’t feel important enough. Maybe with the third, EA will get it right. 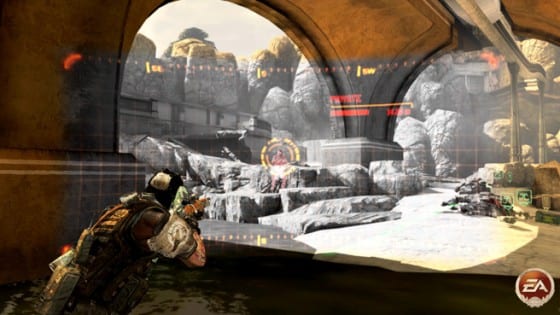 The GPS mode is nice, but could be better

What is important though are weapons, and 40th Day has a cornucopia of them. You’d expect a bountiful offering of killing machines, but the deep level of customization 40th Day offers in this department is astounding.

A quick call up of the customization menu affords you the ability to purchase a multitude of weapons as well as deck them out with what must be thousands upon thousands of variations. Everything from gun stocks to barrels to scopes can be added to a purchased weapon. But it doesn’t stop there. You can purchase extra grenade slots, color schemes for your weapons including a Zebra loadout, and deeper ammo clips for extended rifling sessions. The money you earn from saving hostages, looting dead bodies and completing missions is used to buy these things, but my advice is to not save any cash. Spend it all as soon as it becomes available, because more powerful weapons equals easier run-throughs of difficult levels, and more money is always on the way. 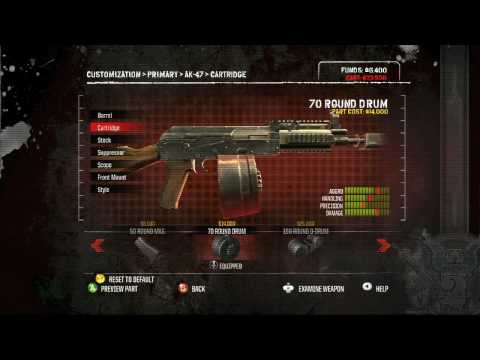 Any way you want it, that's the way you need it

40th Day has a fairly robust multiplayer component. Complete with more than a few game modes including a basic co-op Deathmatch, Extraction (which is like Horde mode from Gears of War), and Warzone, you’ll definitely want to at least try these co-op themed attempts at multiplayer. Like the campaign, multiplayer is much more fun, or at least was for me, with a partner sitting next to you, instead of across the expanses of Xbox Live or the PlayStation Network. 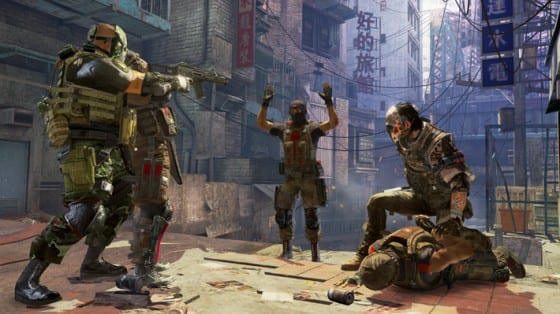 I surrender, or do I?

A dark spot on the entire experience is length. There are only seven chapters in 40th Day and, unless you are exceedingly terrible at shooting a gun, will finish each episode in less than an hour, making the game clock in at a mere 6-7 hours. Ouch, especially with the multiplayer being not so much there.

Blast Factor: Army of Two: The 40th Day is a very good third-person action game with huge emphasis on cooperative gameplay. From the excited onset to the oh so grisly end, Salem and Rios are brothers to the final shot. The game’s core mechanics including gunplay, the cover system, and weapon customization work so very well making 40th Day something action gamers and fans of the series will surely enjoy.

Army of Two: The 40th Day was developed by EA Montreal and published by Electronic Arts. It released January 12 for Xbox 360 and PlayStation 3. Played through entire campaign on PS3. Played about 75% by myself with an AI-controlled partner, other 25% with human partner. Tested all available multiplayer modes. Never found a competent partner. Handed out multiple high-fives, ass-slaps, and comical banter throughout the story. A copy of the game was provided to us by EA for reviewing purposes.