D3 Publishers side-scrolling, sarcastic, kind-of-hates-himself Matt Hazard returns to the Xbox 360 in their Xbox Live Arcade game, Matt Hazard: Blood Bath and Beyond. The game costs 1200 Microsoft points, and is available for download. Many of us (or at least a few of us) remember Matt from the October 2008 release of Eat Lead: the Return of Matt Hazard, a third-person shooter similar in style to that of Gears of War. Even fewer of us remember him from his original side-scrolling arcade games.

Much like its predecessor, Blood Bath does an excellent job of satirizing the gaming culture of the next-gen, poking fun at countless genres, even pointing out that you can find Eat Lead in the bargain bin at your local retail store. ("Budget cuts, bad reviewsâ€¦ but that’s besides the point." claims your command buddy right at the beginning of the game.) While the writing is charming, there isn’t much story to be found; essentially you’re thrown into a side-scrolling shoot em’ up with the threat of having your past-self be deleted by your nemesis, Neutronov. D3 cuts out voice acting and replaces it with standard text boxes, so unfortunately, Neil Patrick Harris and Will Arnett won’t be repeating their performances from Eat Lead. Unfortunately Blood Bath never quite takes full advantage of the parodies that it creates throughout the game, and the player is left with one-liners that never actually go anywhere.

Graphically, Blood Bath is well-made for an arcade game. 3-D character design and levels make this game pop, and the gore that will amass on your screen as you plow down wave after wave of enemies is incredibly satisfying. You are rewarded for killing enemies with showers of blood. Smooth and polished, Blood Bath’s art style stands out from other 3-D and 2-D side-scrollers. D3 offers 8-levels of walking left to right while spraying bullets in random directions until you hit something. Eventually, the gameplay gets repetitive, but between levels there are different bosses that you will face to break the monotony. But once those battles are overâ€¦ back to the horde. What D3 does do for this okay 1-player game is the addition of 2-player co-op, which is definitely one of its stronger selling points. Because lets admit it; blood baths are more fun with friends and 2-player has been around since Contra. 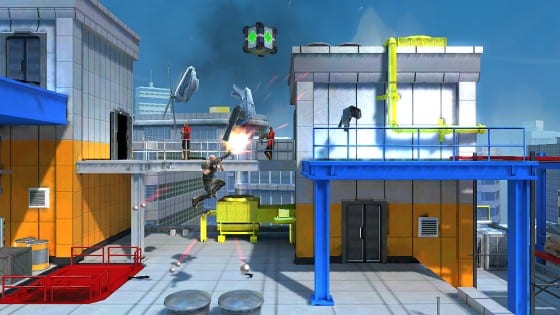 Mechanically, the controls all work generally the way they should. However, there are tedious occurrences that happen far too often during play. Matt can jump, shoot, throw grenades, and even shoot into the background at approaching enemies, but what he can’t do is stop and shoot. A lot of the enemies you face are above you, and you have to jump and maneuver up and down obstacles to progress through the level. More often than naught, Matt would aim his gun up to attackâ€¦ and then run into death water. Or cannon fire. Or a spiked wall. Or a piranha. Yeah, you get the drift. It gets almost impossible in the harder difficulties to actual control your fire, especially because of the amount of enemies that are thrown at you. But if facing a challenge is appealing to you, these harder modes will definitely present one.

[Editor’s Note] You can stop to shoot if you hold down the right bumper, which allows you to fire at a 360 degree angle while stationary.

Blast Factor: Regular story mode lasts from 2-4 hours, but there is always second run-throughs with your friends waiting to happen. With a little more effort and focus, this game could have been a lot cooler, and ultimately a lot more fun to play. Unfortunately for Matt Hazard, his second appearance seems about as lack-luster as his first, but hey, he really is trying his hardest to stay alive.

Matt Hazard: Blood Bath and Beyond is available for the XBLA and PSN at a cost of $15 or 1200 Microsoft Points. A copy of this game was given to us by the publisher for reviewing purposes.