Ever wonder what a Teddy Bear would do if he or she felt wronged for the last time?

Going on a killing spree is likely not what you had in mind, but is still awesome nevertheless. 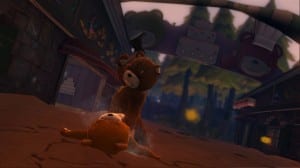 In Naughty Bear, from 505 and Artificial Mind and Movement, that’s just the case, and from today’s debut trailer and screens it looks like we’re in for quite a treat.

Here’s the official description of the game. I didn’t want to summarize or paraphrase it, as the wording is  just so darn amazing.

“Players will take on the role of Naughty Bear, a bear driven to seek vengeance after the other bears don’t invite him to the big birthday party. Scorned for the last time, Naughty Bear becomes hell bent on manipulating and terrorizing the blissful bears inhabiting the Island of Perfection. Featuring an array of weapons, objects and scare tactics, gamers strive to earn Naughty Points as they inflict physical and psychological harm on Naughty Bear’s enemies.”

Look for Naughty Bear for Xbox 360 and PlayStation 3 later this year.