What if drinking soda was useful for more than rotting and staining teeth, and instead could be used to acquire digital goods from Electronic Arts? Would you be interested? 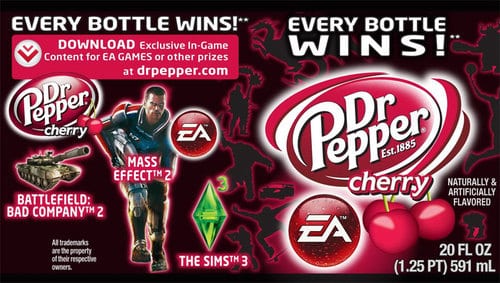 Much DLC to be had.

Downloadable content codes for EA games Spore, Battlefield Bad Company 2, Mass Effect 2, Battlefield Heroes, and The Sims 3 are hiding under the soda caps just waiting for you to snatch them up.

“We wanted to give consumers an unrivaled experience by offering a range of valuable game enhancements that elevate their experience within the games and create brand affinity,” said Tony Jacobs, vice president of marketing, Dr Pepper. “The EA promotion gives fans an unbelievable gaming experience that they can only access through Dr Pepper.”

Here’s the official description of each game’s available DLC, as written by the Dr. of Pepper.

I love Dr. Pepper, but don’t drink that much soda. But that’s likely to change when I head out to 7-11 tonight!