Dubbed “Awakening,” this downloadable content will require the DAO disc, and  an additional $39.99 from your wallet when it comes to PS3, Xbox 360 and PC March 16. 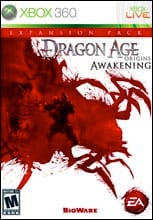 According to the press release, the DLC is set after the events of Dragon Age Origins in Amaranthine where players will assume the role of a Grey Warden attempting to restore order. Outside this task, gamers will fight new enemies Inferno Golem, Spectral Dragon and a “mysterious foe that calls itself the “Architect.”

Best of all, perhaps, is that the DLC raises the level cap of the game,provides new abilities, spells, specializations and items for players to amass, and affords you oh so many more hours to sit in front of the screen.

Additionally, with Awakening, players can import and revise their characters and can even create a new Warden from the land of Orlais and will have five new party members available to recruit for the perilous journey.

“Dragon Age: Origins — Awakening shows BioWare’s commitment to our fans by delivering new story-driven experiences which enrich the dark heroic fantasy universe our fans have come to know and love. The vibrant worldwide community of Dragon Age fans will relish uncovering the secret motivations of the darkspawn, revealing how the darkspawn continue to infest the world despite the defeat of the Archdemon.”

$40 is a lot, lot, lot of money. That may not sit well with gamers. We’ll see. Internet, what do you think?