With holiday season soon coming to an end, many iPhones will be opened and unwrapped over the course of the next few days.  Keeping that in mind, it’s probably most appropriate to start handing out some recommendations on the hottest and most intriguing apps for the newest bearers of iTech to download.

First on the list is an app that I just found out about called Turf Wars.  This GPS-focused gangster game allows players to not only enjoy the excitement of running their own mob, but to take over their local turf as well.  Nick Baicoianu, CEO of MeanFreePath LLC, was kind enough to take a few minutes during this very busy time of year and talk to me about his creation, Turf Wars.

BLAST: Can you give us a brief description of Turf Wars?

Nick Baicoianu: Turf Wars is a GPS-based Mafia game where the core aspect of the game is to control real world territory AKA "turf" from your iPhone or iPod Touch.  The gameplay is very similar to that of other games in the Mafia genre but the GPS adds several enhancements, not just with the idea that you’re taking over real world turf, but it also leads to a more enhanced economy and adds more to the social gameplay aspect as well.

BLAST: What was the inspiration for Turf Wars?

Nick Baicoianu: I got my iPhone in Feburary of this year and I noticed that there weren’t too many games that took advantage of the GPS feature.  As you know, the GPS feature has been on smartphones for many many years now, especially with the Blackberry and iPhone who’ve done a good job making that available for developers, but there just weren’t many games that took steps beyond just using it for navigation and Google Maps.  So, I thought it would be kind of fun to create an app that incorporates the fun with your GPS location. 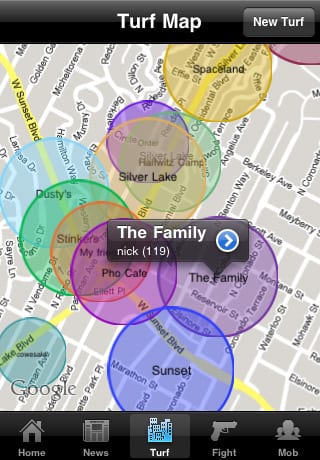 BLAST: Incorporating standard features, such as GPS to iPhone games is an interesting way to get the most out of this platform.  Is this something you feel adds significant value to apps and games for the iPhone?

NB: Well, I think the first thing the players say when they compare Turf Wars with other games in the genre is that they love the location-based aspect; they love the idea of controlling their neighborhood, their favorite bar, favorite restaurant and kind of competing with people for that element.  So, yes I do think adding things like GPS does add a lot of value to games of this genre and I’m looking forward to, as this game gains traction, how the general public takes to it as well.

One thing that GPS adds to the game — or one of the side effects of having it, which turns into a pretty interesting gameplay benefit — is that you can have this sort of fake economy where you can own like 300 sports stadiums and only interact with players who are at a certain level, but you can do that with almost all games within the Mafia genre because everyone is playing in one giant universe, whereas with the turf and the GPS aspect, players have to see each other on the map.  So, there’s the whole scarcity of land, scarcity of money and things like that which isn’t available in those other Mafia games.  I found that I typically get bored with those types of games when I’ve made so much money and there’s nothing I can do but buy more stuff that will make me even more money, so I think the GPS feature adds a much deeper dimension to a game of this genre.

BLAST: The stylization of the game is interesting in that it’s fairly basic with the black and off-white colors; almost like a newspaper.  What made you and the developers pursue that route?

NB: The core style that I was going for when we were first storyboarding the app was to aim for a gritty, street-level feel rather than a sort of Godfather-like style.  You can imagine guys like the characters from Lock, Stock and Two Smoking Barrels fighting over a local block but you can’t imagine Sonny Corleone running down the street to claim the nearby restaurant.  We thought that a sort of grittier feel would reflect those who are playing the game and just getting started in their illustrious crime careers, so to speak.

BLAST: Version 1.1 was released a little over a month and a half ago.  What issues were resolved and features added with this update?

NB: Well, the core features that we added were primarily map related.  We improved the maps so that if there were turfs that were really small, as in they were just built, they would show up as pins; things like that which would make turf easier to locate on a map, as well as a couple of navigation improvements.  We also more tightly integrated the map with the other parts of the app, so if you were on somebody’s turf you could click over to the map and see that turf and where it was in context to the broader map.

BLAST: Are there any features you’re looking to add in the future?

NB: Well, we get a lot of feedback from our users and they’ve got a lot of good ideas, so we’ve got a few ideas in the pipeline.  Some of the more important ones would be like adding some more social features and were even considering an alliance feature where players can team up and get more involved and add a bit more depth to the game in terms of the combat and social intrigue.  For instance, two guys who wouldn’t be able to beat the local capo very easily could team up and try and take him out.  I’m really excited about the features because this is something that hasn’t been done in any of the Mafia genre games to date.  I think they’re going to add a lot to the game.

BLAST: The forums are a nice approach to get direct feedback from your customers and patrons.  Have you found this to be an effective way to communicate with the Turf Wars community?

NB: I would say that the forums have been very helpful.  The forums were actually a feature that was requested a lot by users in the beginning.  We liked it because it gives us a way of communicating directly with the community by making important announcements.  It also gives players a sort of way to interact with each other in order to put a face to a name, so to speak.  They can recruit for their mob, take down a local guy and offer each other tips and help on certain aspects of the game.  So, overall I think it’s been a very successful feature for us so far.

BLAST: What about MeanFreePath, the company that has designed Turf Wars?  Can you tell me a little about your firm?

NB: We’re a relatively new firm; we basically started when we released Turf Wars, which is our first release on the iPhone platform.  Our firm is basically me and a couple young guys — a developer and a designer — and we’re basically focusing on the iPhone platform as well as other smartphone platforms in the GPS aspect.  I think, in general, I think this genre is in its infancy and there are a lot of interesting ideas that have been thrown around that could lead to a long series of games.

BLAST: How does MeanFreePath feel about the potential of the iPhone as a platform?  Do you see it as a legitimate gaming device?

NB: Absolutely.  I think that it’s a platform that is very much in its infancy.  Although there are a lot of developers for portable devices such as the PSP, there is going to be a learning curve to get familiar with Objective C and other things like that.  But, I think that as you get more developers who are more familiar with the platform, I think you’re going to see an increase in not just the number but the production value of the games.  I also believe that the GPS capabilities are one major advantage that the iPhone and iPod Touch have over the existing portable platforms.

Even though GPS-focused games are still very rare, you’re already seeing a lot of gaming websites that focus on local leaderboards that are dealing with games that have nothing to do with GPS.  So, I think with all of that attention, I feel that GPS for the iPhone, the Android and smartphones will become a more valuable feature for the gaming aspect. 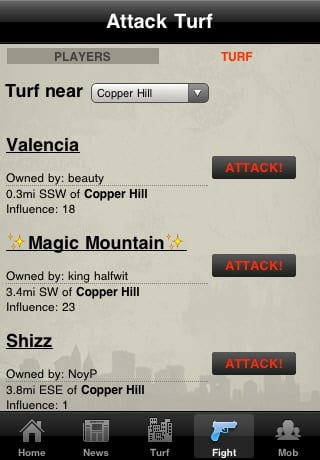 BLAST: Are there are any new or upcoming developments or projects you guys are working on or excited about?

NB: I don’t think we can talk too much about upcoming projects, but I do feel that the feature I mentioned earlier — the alliance feature — is something I’m very excited about.  I think that it’s something that hasn’t been done before in this Mafia genre and I can’t wait to see how it pans out.  I think it will be a very positive development.