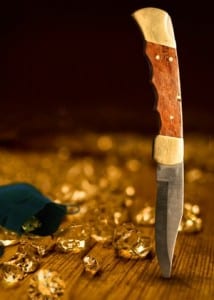 Lyric Stage wants you as their captive. They’ve seen you have some play money and some time on your hands and now you will hear what they have to say.  It won’t all be pretty, but “Groundswell,” directed by Daniel Gidron, will lock you in suspense and release you with your head spinning.

In this psycho-political drama from South African playwright, Ian Bruce, you share the plight of Smith (Richard McElvain), a wealthy white tourist who goes to a remote port town on the South African West Coast seeking a little adventure and a few rounds of golf. Smith finds that he is the only the guest in a small, beachfront inn, run by two characters desperate to raise themselves from the ashes in the dangerous world of post-apartheid reconfiguration. They are the mild-seeming Thami (Jason Bowen), the black gardener and caretaker of the estate and Johan (Timothy John Smith), his menacing white friend, a former policeman with a taste for booze and a hunting knife.

These two want to talk to Smith about making an investment in some projects of theirs concerning the diamond trade — some more formal than others. Outside, a powerful storm is brewing. Whether Smith is interested or not, he won’t be leaving anytime soon, and while inside, there is only one topic up for discussion.

Groundswell is more than a suspense drama. It is a provocative exploration of race relations with roots in the apartheid conflict and resonance everywhere there are deep-seated conflicts between tribes with bloody pasts and pyrrhic victories. Bruce has the master playwright’s gift of distilling large issues down to a conflict between three men with violence in their pasts. Thami, wants to raise himself from poverty with white’s money but will not be seen as a beggar. Johan, determined to prove himself a champion of the oppressed blacks, think he knows what the need better than they do and Smith, who lived an apolitical life of privilege under a cruelly oppressive regime, will not accept his complicity or change his ways in its aftermath.

Each of these characters is acted superbly, with depth, complexity and pathos. These actors have gotten into their heads, and it is a stimulating challenge to try and follow them thereâ€”particularly form our vantage in the new "post racial" America.

The New England Premiere of “Groundswell” runs through January 30 at the Lyric Stage Company of Boston in Back Bay.