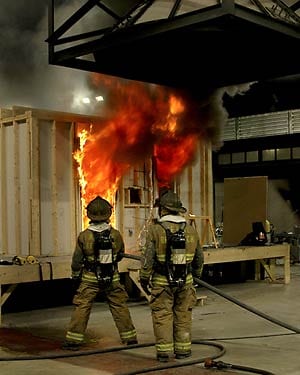 ATF fire engineers put out a fire after the testing is completed. (Media credit/Courtesy of the ATF)

How do you investigate fire? By burning something, of course.

Arson is one of the hardest crimes to solve. It’s often easy to prove that a fire was deliberately set, but solving the crime is another matter.

That’s where the forensic techniques applied at the Bureau of Alcohol, Tobacco, Firearms and Explosive Fire Research Laboratory come into play. According to the ATF, arsonists around the country are being caught every week thanks to the science at work here.

When two people were killed in an overnight arsonist’s rampage in Northampton, the ATF was called in, and the bureau is currently using its cutting edge forensics in an attempt to solve this brutal spate of crime in a small Massachusetts town.

One of the fire lab’s biggest tasks is to reconstruct the actual scenes of fires. In a controlled environment on its 35-acres in Ammendale, Md., the ATF will burn rooms, buildings, cars and anything else it needs to destroy in order to solve crime.

Investigators build a scale model of a crime scene with scale props like furniture and fixtures placed exactly as they appeared in, say, a house fire. A full-scale structure is also built to test fire theories.

Last year the lab did 184 test burns for criminal investigations. It can take anywhere from 2 weeks to 6 months to set up and conduct an investigative burn depending on the size and scope of the burn.

The smallest fire tests involves candles or fuel spills. The largest, the ATF says, involve three-story buildings up to 60 feet long that are used to investigate fires in apartment complex, hotels, stores and even churches.