Editor’s note: After several weeks of on-again, off-again debate, a controversial forum at the University of Massachusetts in Amherst was held in November focusing on sedition and a related trial in the 1980s. The key note speaker was going to be Ray Luc Levasseur, founder of the radical United Freedom Front. In 1981, a United Freedom Front member shot and killed a New Jersey state trooper named Philip Lamonaco. Law enforcement agencies from around the country rallied and pressured college and government officials. In the end, Levasseur, who is on parole, was not allowed to leave his home state of Maine and did not take part in the forum. Hundreds of police showed up anyway to protest the forum.

Now, the United Freedom Front was active in the 1970s. Generation Y’ers don’t remember them. But some do. One of us who remembers the UFF all too well is Sarah Lamonaco, 28. She’s trooper Lamonaco’s daughter, and she was 10 months old when her dad was murdered. This is her story. — John M. Guilfoil, Editor-in-chief. 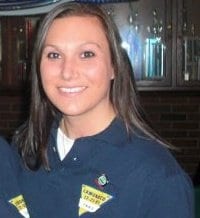 On December 21,1981 Trooper Lamonaco was murdered on Route 80 in the state of New Jersey, leaving behind a wife of 6 years, Donna, and his three children, Laura, 5; Michael, 4; and me, Sarah, 10 months old. That day changed our lives forever.

December 21 is and will be the hardest day of my life. I never had the chance to know my Father. I learn about him through the pictures and memories my family shares, but the pictures do not have his voice or his smell, his laugh or many other things that I will not know about him. I remember being the only child in the classroom at school to make a Mother’s Day card when it was Father’s Day. On my college graduation day I wondered if he was proud of me. I wonder who will walk me down the aisle on my wedding day.

I didn’t choose growing up and learning that daddy was never coming home. My mom tells me a story of us in the car and I asked her for Jesus’s phone number because I had to ask my dad a question and that is where he went so it made sense, right? If it was that easy it would have been great. So I had to think of another way to speak to him. My family and I later wrote a letter on a balloon and sent it up to the sky for my dad. We often go and make sure his spot at the cemetery was the best looking spot around. Looking back at all these things that I did helped me cope with my dad not being here, I know went through a part of my life where I felt alone — that nobody else know what I was going through. All my friends had fathers at sporting events and school functions, and most of all they had a father who came home at night for dinner.

I spent many years not knowing where to put these feeling. One day in the 1980s, my Mom became President of Concerns of Police Survivors (C.O.P.S.). We went to Washington D.C. and I learned that I was not alone. Many other children have gone through what I have and were feeling what I felt. I finally learned that it’s OK to think about him and miss him and to talk about him. I may not be a “normal” girl and have a living, breathing father, but I had one thing many don’t. I have a angel with me all the time. I took my anger and confusion and turned it to a positive outlook. I stopped wondering how I was going to do things with out my father and I found ways to make him a part of my life. When the class made a Father’s Day card I became strong enough to make one and tell the class that I made it for my Dad and would put it on his grave site. When I graduated, I looked up and said thank you for helping me get through this path and keeping me strong. The one that I have not had to deal with and will be bittersweet is my wedding day. I know the perfect way to have my dad with me on that day and that is to walk alone and have my flowers in his hat. I always said my dad would walk me down the aisle, and he will.

Today I am 28 years old, and I still think about my father just as much as I did when I was young. Life has been hard for my family, but I have had an amazingly strong mother who raised three of us. I am very proud of my Fathe,r and I am proud to be Trooper Lamonaco’s daughter. I still attend a rally in Washington D.C. every year to honor my father. For any other child out there who has lost a parent, know that life is what you make of it. We all have bumps in the road. Ours are biger than most, but we need to find away around them and know that our loved ones are always with us.

This year, as in the past, my father’s stocking hung on our fireplace filled with all the love, joy and a pride that only a girl could have for her dad.