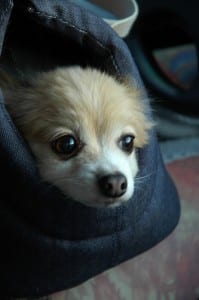 Nick is a cat person. (Media credit/Evil Erin via Flickr)

It is a universally acknowledged fact that a cat person should never become a dog walker. That’s what I realized when I had to carry Gidget, a 2 pound "purse" dog across Charles South to get to the Commons. The dog wouldn’t walk. It just stood there like an idiot waiting for me to make the next move. Now don’t get me wrong, I like dogs. I’ve had everything from Mutts to Cocker Spaniels to German Shepherds, but this creature I tell you was not a dog. It was a football disguised as one. If ever in my life I wanted to become a quarterback, it was at that moment. But no one seemed to realize what a pain in the ass Gidget was except for me.

"Oh My God! Your dog is sooooo cuuute!!!" packs of girls would squeal at me as I dragged Gidget to a spot of grass.

I guess it’s my own fault for taking on this job. But what can I say; I was desperate. I’d been in the city a month already and I still was jobless. Two hundred resumes on Craigslist didn’t help. There was zero scholarship money coming from my graduate school. (Thanks a lot, Emerson College.) I had a BA in English. So basically I was fucked.

I’d never waited tables before. I’d worked two summers as a cashier for a grocery store and spent my entire undergraduate career working various campus jobs. Sorry, knowing how to walk backwards and give tours wasn’t going to help me find employment in the city in the grips of an economic recession.

So when the opportunity presented itself I jumped on it. No questions asked. Idiot.

I met my future boss at the home of one of my soon-to-be dogs. Let’s call him Bob and let’s call his company "Honey, Did You Walk the Dog?" Bob was 32, married, and going back to school to become a chef.

"This dog walking thing is just a side-gig," he tells me.

I could tell. His dad had to drive us around in his Chrysler La Baron to the homes of Ripley, a Weimaraner; Stella, a beagle mix; and Sadie, a brown Mutt.

"I’m in kind of a bind. My last dog walker quit. I need someone for tomorrow. Can you do it?"

I should have heeded those words, but I was desperate. So like an idiot, I agreed to walk 3 dogs in Jamaica Plain and then 4 dogs downtown. I figured that I’d make maybe $10 an hour. Scratch that. How about $7.50 per dog? Fucked yet again.

Aside from Gidget, the dogs themselves weren’t all that bad. It was the time going from dog house to dog house which killed it. Ripley lived on my street, but the other 2 dogs lived on the other side of Jamaica Plain. It was summer. I walked. Then I remembered Bob’s words.

No problem, I thought. I can handle that. I couldn’t handle my boss though. Every day, instead of a set schedule, I would receive a text from him.

"I need you to walk Ripley, but not Stella today."

I wouldn’t say that I’m a Type A person, but I still like to have my dogs slightly structured. But I thought, "maybe this will change."

Well, it took probably 2 hours time to walk myself and all the JP dogs. Then I hopped on the T to walk the two twin girl terriers, Mia and Malea from their apartment in China Town to the Commons. They chased squirrels and dragged me along with them. But then it was time for purse dog.

Gidget spent her days sleeping on a satin dog bed on the 12th floor of a Penthouse. Her owner looked like a slightly irritated Shirley MacLaine who had nothing else to do with her day except criticize the way I put on her dog’s leash.

"You’re not putting it on right. Now, don’t let other people touch her. Don’t let her get tangled in her leash. And for heaven’s sake, don’t forget to pick up after her! The last one of your people didn’t and a police man solicited a ticket to him. Do you know how bad that makes my poor angel look?"

So one day after I had to coax Jack, a skittish black Mutt out from under a bed, I called Bob and quit. There had to be something better out there.

So I agreed to meet him, deliver the checks the owners had left him for me to pick up and then we’d exchange the keys for my check. But unfortunately, he wasn’t there at our meeting place, the Mandarin Hotel, but he had left my check.

I had estimated that I would receive close to $220 for 2 weeks work. I got about 1/3 of that. And like an idiot, I didn’t sign anything. I was never an official employee. So I left him the keys for the dogs, but kept the checks for him with a note saying I would be happy to return them once I received my compensation.

An hour later I received a text message saying that if I didn’t pick up my phone the police would be contacted.

My experience with the police could basically be summed up in the one speeding ticket I got when I was 18 and the 20 minutes of crying that henceforth occurred. So suffice to say, I was a little jumpy.

My mother advised that I just count it as a loss. He really couldn’t do anything to me legally wise. I had never signed anything. It would technically only be a "he said/ she said" kind of situation. So I made sure to cash my check and then mailed him back his checks.

It may not have been a total defeat though. I happened to call one of the other new dog walkers and explained what happened to her. Let’s just say "Honey, Did You Walk the Dog?" is going to need some new help very soon.

About a week later I got a job at the local Goodwill. I’ve never been so happy to in retail in my life. During the interview process, they asked me why I wanted to work with people? I answered: