The year is coming to a close, but Square Enix has one potential hit left up its sleeve in the form of Final Fantasy Crystal Chronicles: The Crystal Bearers. Now, we are suckers for anything Crystal Chronicles related around here, from the original GameCube offering that gave players a chance to link up their Game Boy Advance to their GameCube to the wireless multiplayer of the DS titles to the distinctive WiiWare games that put new twists on old genres, all while utilizing a now familiar universe.

The Crystal Bearers aims to be even more of an experiment for Square Enix than the previous games in the Crystal Chronicles series, as it doesn’t rest on familiar concepts and play styles, but does so within the confines of a full retail game rather than a downloadable release. We had the opportunity to speak to Akitoshi Kazawu, who worked on The Crystal Bearers, about the series itself and what we can expect from the last big game of 2009.

BLAST: The whole Crystal Chronicles series is different from the more traditional Final Fantasy games, though they both use a similar universe. How did the series come about in the last console generation? What prompted making the series a Nintendo exclusive?

Akitoshi Kawazu: Over the years, FINAL FANTASY has transitioned from SNES to PlayStation platforms, and the top quality visuals best represented in the in-game movies have become a staple feature of the series. While this quality has been embraced by core gamers, it seems to have distanced beginners and younger players from the FINAL FANTASY brand.  In the earlier days, Nintendo’s then president, Mr. Yamauchi, had asked us to create a FINAL FANTASY game that could be enjoyed by any player, no matter what age or gender; the resulting project was the first FINAL FANTASY CRYSTAL CHRONICLES game for GameCube. We have followed up since with several titles for Nintendo platforms, but feel that we haven’t been able to develop a game that fulfills Mr. Yamauchi’s request 100 percent. We’re going to stick with Nintendo platforms until we have achieved this. I think it’s a really "Japanese way" of thought, so hopefully this explanation makes sense. 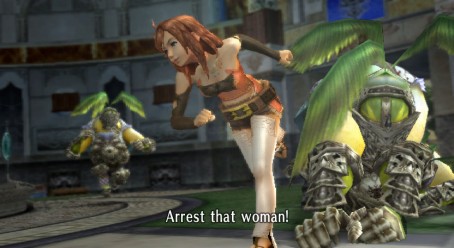 BLAST: While the first few games were all similar, in that they were multiplayer offerings that focused on exploration and item collection, the series has taken a different turn on the Wii. First there was My Life As A King, and then this year’s My Life As A Darklordâ€”each of which is one of our favorite WiiWare titles for different reasons. Where did these ideas come from, and how did they develop into games? Do you see this same sort of genre-bending experimentation in the future of the Crystal Chronicles series, either on WiiWare or as full retail games?

AK: In my mind, WiiWare is a platform of its own, different from packaged software both in terms of technology and business-model. In the beginning, the idea was to make an RTS game for WiiWare utilizing the graphic resources of the GameCube version, to shorten the length of development.  We were successfully able to incorporate the FINAL FANTASY CRYSTAL CHRONICLES world into the resulting game system, and FINAL FANTASY CRYSTAL CHRONICLES: My Life as a King turned out to be a great game. FINAL FANTASY CRYSTAL CHRONICLES: My Life as a Darklord was a sequel that was always part of the plan. At first we had planned for the two games to have the same systems, but wanted to change things up a bit, and transitioned to a tower defense oriented system instead. Moving forward, I would like to create more games for WiiWare with systems that would be difficult to realize with a packaged title.

BLAST: The Crystal Bearers takes that evolving genres cue a step further, as it’s a single-player game with a deeper story and a focus on adventure. What prompted the switch to more of an epic quest, rather than a Wii-exclusive multiplayer offering?

AK: Development for this title began around the same time as FINAL FANTASY CRYSTAL CHRONICLES: Ring of Fates for DS.  The DS title got the multiplayer focus, as we felt the platform was more suitable for multiplayer action, and for FINAL FANTASY CRYSTAL CHRONICLES: THE CRYSTAL BEARERS, we put more emphasis on the single player experience that Wii is known for.  With the GameCube version, we faced challenges in revolving a multiplayer action game around a single screen, so that was also one of the reasons why we chose this direction. 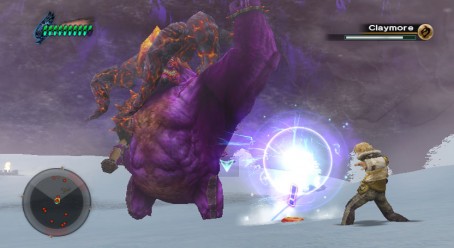 BLAST: Tell us a bit about the background of the game’s story, and what kind of adventure we are in store for this December.

AK: Annihilated in the Great War that took place ages ago, the Yuke tribe had completely disappeared, even from people’s memories. However, members of this supposedly extinct tribe appear and attack the passenger airship Alexis. Layle, the main character of this game, is hired as an escort to defend this airship. In this adventure you will play as Layle, discovering why the Yuke tribe is back, and what exactly it is that they want.

BLAST: The protagonist is very different from the create-a-hero setup in the other Crystal Chronicles titles, but he even comes off as more experienced than many heroes in the flagship Final Fantasy series. In a genre dominated by teenagers, children and inexperienced heroes, how did Layle come to be?

AK: FINAL FANTASY stories have always been about growth. The main character’s problems, struggles, joys, sense of accomplishment or sense of loss are all expressed throughout the course of the game. However, if the plot is set up with the same formula every time, we won’t be able to expand the breadth of storytelling. With this game, we wanted players to enjoy an entirely different type of story and main character. This hero is extremely "hero-like" in his actions. Layle is a hero that is constantly one step ahead of his enemies, and offers players an exhilarating experience.

AK: The element that differs most from past titles is that players can interact with the game’s environment. Objects, people and creatures, among other things, are all part of this "touchable" environment. Everything will come back at you with a variety of reactions when you come into contact with them.


BLAST: Did you have any direct inspiration for the title? Personally, based on the trailers, it looks somewhat like The Legend of Zelda’s adventuring , if Link was a Jedi with Force powersâ€”is this an accurate description, or is there something else we’ll see once we get to play ourselves?

AK: Link with Force powers! That’s actually not too off-base. However, Layle is far more confident than Link, and is not as polite. Layle uses his powers instead of swords or bows and arrows, essentially to show off that he doesn’t need to rely on weapons. Layle’s powers bring about a huge variety of reactions. This is because you can use his powers on anyone, ranging from town’s people to guardsmen. These are things that Link couldn’t do, right?

BLAST: Did you run into any problems developing for a system with the Wii’s control system? Was there anything you wanted to work into the game that did not make it in due to these difficulties?

AK: There are certain aspects that we cut intentionally, but nothing that we were unable to achieve because of technical difficulties. For example, in the early stages of development Layle used to wield a sword, but because we were able to integrate Wii controls so well in the game, we decided not to include that feature. This way, Layle’s powers could be emphasized.

BLAST: Is there a possibility that The Crystal Bearers will develop into its own side series, as it differs so much from the traditional Crystal Chronicles and takes place so far ahead in the universe’s timeline? Is this something you would like to see happen?

BLAST: Lastly, tell our readers the one thing about The Crystal Bearers that they may not know to convince them to pick it up the day after Christmas.

AK: Step into the shoes of a daring hero, use his ability to control gravity at will, and interact with everything within the game world, from objects and people to creatures. That sums up FINAL FANTASY CRYSTAL CHRONICLES: THE CRYSTAL BEARERS. Don’t miss out on this experience!