If ever there were a nearly perfect example of a sequel done right, it’s Assassin’s Creed 2. The first game was a revelation of open world exploration and mobility, with an amazing historical setting and immense world to explore. Unfortunately, as riveting an experience as it was, there just wasn’t enough to do. The sequel takes care of this problem quite handily. While keeping the original idea of a well-developed, fascinating historical setting, the sequel improves on almost every other front.

The setting has changed to 15th century Italy, and there’s a new assassin to go with the times. His name is Ezio Auditore de Firenze, and while the overall plot is still assassins versus Templars, Ezio is an incredibly different character than the original Altair. The main difference is that unlike Altair, Ezio isn’t a born assassin. In a plot twist reminiscent of the movie Wanted, Ezio discovers that his father was a master assassin in a covert war. After his father’s murder, Ezio must take up his father’s trade.

An improvement on the genetic memory story arc is also a welcome surprise. Although the future takes a distinct backseat, the kidnapped possessor of all these killer memories, Desmond Miles, has some fascinating, if clich©d, character development. It also ties in nicely with, and expands upon, Altair’s history.

Of course, Ezio is the focus of the masterful mix of history and fiction that creates a thriving, vibrant, and fascinating world. You’ll become best friends with Leonardo Da Vinci, get caught in famous family turf wars, and visit an amazing array of spectacular Renaissance cities, beautiful Italian country, and even small towns and villas. Moreover, Ezio will have his own villa and town to maintainâ€”complete with a simple, yet engaging economic system completely new to the series. 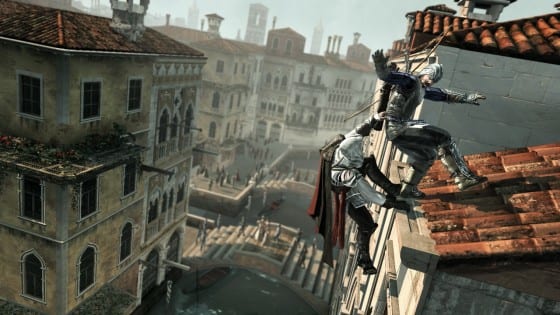 Every location offers a slew of art, weapons, armor, and other upscale finery to purchase. Purchasing such things adds to the value (and wealth) of your villa, as does paying to upgrade the various stores and services. The more you spend on improvements, the more income you receive. What’s it all for? The core of the gameplay hasn’t changed. You are still a master assassin running, climbing, jumping, and killing for hours on end. But this time, you have friends. Or at least, employees.

Groups of courtesans, thieves, and mercenaries are readily availableâ€”for a priceâ€”to either draw attention away from you or to help you fight.  For instance, courtesans can work their wiles on a group of guards while Ezio sneaks into a restricted area. Alternatively, you could keep your money, kill the guards yourself, and then steal the treasure behind the door. Yet another option is to just ignore the guarded treasure altogether, and stick to the main storyline. Boredom is simply not an option with so many choices.

Happily, the entire world is ripe with hidden treasure chests, collectible feathers, and valuable codex pages, not to mention vigilante justice, timed rooftop races, and courier jobs. Feathers are the new flags, but this time with an actual purpose. Treasure chests both increase your wealth, and are simply fun to findâ€”especially the well-hidden ones. Your local art dealer will be happy to supply you with treasure maps, should you need them. You could spend hours exploring and taking on side missions without touching the main story. Fortunately, the overall story is so well done that spending even more time on the central story is no chore. So, the biggest problem with the original game is solved in spades. 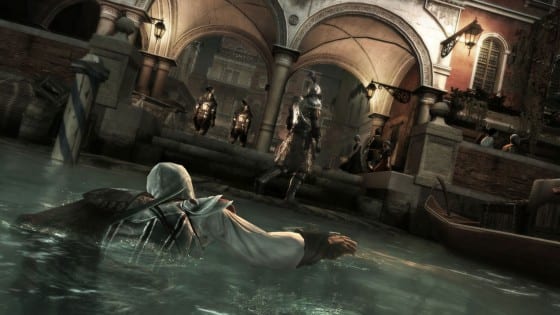 The actual gameplay, however, will be instantly familiar to fans of the first game. Free-running and the counter-based combat have been a bit refined. Ezio is a little better at finding purchase while climbing, though the controls still suffer from the same occasionally stilted feel and unresponsiveness. You can now taunt a slow opponent into attacking, instead of playing a waiting game. There are a lot of new counters. Ezio can fight with both of his wrist blades, and even steal opponents’ weapons and use them against them. New assassination moves also spice up the action, letting Ezio become a master of death from both above and below.

Blast Factor: All these small improvements improve the sequel. The increase in the physical world of the game, and in the variety of the gameplay add to the diverse refinements. The presentation is still stunning, the voice acting is much more authentic, and there’s just a lot more to the game. As great a game as the first Assassin’s Creed was, this sequel is better in every way. It’s easily recommendable and absolutely one of the best games of the year.

Assassin’s Creed 2 is available for the Xbox 360 and Playstation 3 for $59.99. A copy of this game was given to us by the publisher for reviewing purposes.