Unlike Boston’s famous World of Wheels auto show that allows car owners and aftermarket suppliers to showcase their own fire breathing, custom painted, tricked out rides, The New England International Auto Show is more focused on the world’s major automakers and their new vehicle lineups for the upcoming year. This year, 30 manufacturers were represented from December 2-6 at the Boston Convention and Exhibition Center.

Just about every major production vehicle for the 2010 model year rolled its way onto the carpeted floor of the massive convention center. With the Ferrari booth sandwiched between those of Acura and Hyundai, the collection of vehicles spanned a wide array of price brackets and purposes. In typical fashion, the exotics dropped jaws of all passers by, but the showstopper was undoubtedly Chevrolet’s engine testing exhibit. Every half hour, a GM engineer (clad in a full-length lab coat) ran a small block Chevy V8 through it’s paces on an industrial dynamometer. Large monitors displayed the engines horsepower, torque, and RPM’s while the non-existent muffler system drew everyone away from the subcompacts and hybrids that suddenly seemed a lot less cool.

After being so tactfully lured to the Chevrolet section of the exhibition floor, the emphasis on horsepower translated throughout the show. Camaros, Challengers, V10 powered Audi R8’s, and the new Corvette ZR1 — capable of speeds over 200 MPH — set a tone of raw, unadulterated speed. Despite high fuel prices and an ozone layer with the structural makeup of Swiss cheese, there is no denying that the muscle car is bigger than ever for 2010. 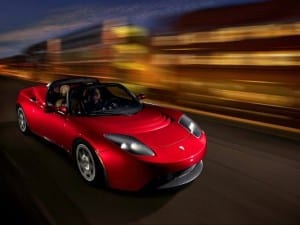 Electricity, though, was not to be outdone. The Tesla booth garnered more oohs and ahhs than the massage parlor your “friend” “read about” on Craigslist. Despite having to (ironically) shout over spine tingling V8 wales, the brand’s representative made a good case for the battery operated 2-seater, which is capable of out-accelerating most of its petrol-powered competitors. Show-goers were pleased to hear Tesla’s plans for a new dealership in the Boston area.

Hybrids, too, were well represented, with models like the new Escalade proving that there is a low(er) emissions vehicle for everyone.

The show was not limited to the observation of still-life. High-tech driving simulations gave even young enthusiasts the chance to get behind the wheel of a racing machine. Beyond simulations, Cadillac offered test drives on four of its new models: the CTS, CTS wagon, SRX and new Escalade Hybrid. I had the chance to pilot all four on the closed track set up around the convention center. While it is always fun strapping into a brand new drivers seat, I was a bit disappointed by the suggested speed limit of 20 MPH and confined testing area. While I am convinced that the new Cadillacs would do a fantastic job negotiating my driveway, it was hard to get a feel for how the cars performed in real world conditions. When GM decides to host a test drive at an airstrip, call me, but this didn’t really do it for me.

But overall, the 2009 New England International Auto Show was a huge success. It is an event that thousands of fellow enthusiasts mark on their calendars each winter, and now it’s just a matter of waiting 364 days until the next time the world’s leading auto manufacturers ride into Boston.