“Shakespeare Exploded” is an apt title for the American Repertory Theater’s current line-up — whether you find these experimental productions violent and destructive or simply brilliant, you cannot deny that they are pyrotechnic.

It would be false to call these shows "Shakespeare performed," almost never is a word of text written by Shakespeare spoken by a performer. Even "Shakespeare adapted" would be an understatement. “The Donkey Show” at Club Oberon, “Sleep No More” at the Old Lincoln School in Brookline Village and “The Best of Both Worlds” at the Loeb, are wholly new works, of greatly varying quality, inspired by and referring to certain Shakespeare plays. 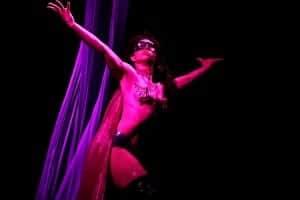 “The Donkey Show,” conceived by Randy Weiner and directed by Weiner and A.R.T. Artistic Director, Diane Paulus, is a trip to a 70s, Studio 54-style disco. As a groundling, you boogie to recordings of vintage hits with some glammed-out male go-go dancers as well as fellow ticket buyers, and for a larger fee, you can be a voyeur in stadium seating. This is the show as much as the other attraction: burlesque performers karaokeing disco hits in between skits that riff on “A Midsummer Night’s Dream,” playing up their disco themes.

As camp burlesque, this piece works well. Its performers are attractive, bombastically energetic and occasionally funnyâ€”although their improvised vamping misses more than hits and can be grating if you manage to stay sober. The highlight is Rebecca Whitehurst who performs some truly impressive aerial acrobatics as a stripper named Titania with trademark butterfly pasties.

“Donkey Show” is also strong as an environmental theater piece if you are predisposed to disco — though if you are currently a club-goer, you might just as well go to a club. The piece will work better if you are a former club-goer or are club-curious.

As a take on “A Midsummer Night’s Dream,” well, there are insights to be gleaned, but you probably will not be inspired to dwell on them unless you plan on taking a Marjorie Garber class. The fact is, Shakespeare is this production’s muse, but could easily be axed from the show with nothing lost.

“Sleep No More,” a production of the London company Punchdrunk, is the true gem of this series. It is a fully, immersive, interactive, environmental theater piece, inspired both by “Macbeth” and various Alfred Hitchcock Films, in particular, “Rebecca.” It is set in an abandoned former school, elaborately transformed into a kind of haunted house echoing with an amplified suspense-movie soundtrack. Ticket-buyers, masked and silent, explore the space at their will, one room at a time, encountering violent and sexually charged ballet performed by actors who remain exhaustively and unflappably in “Macbeth” and Hitchcock-inspired characters.

“Punchdrunk” believes in keeping much hidden from its audience to enhance their feelings of mystery and discovery, but there are a few things you really should know going in. As with “The Donkey Show,” this experience begins and ends in an in-house cabaret/bar. You should take advantage of this. Once you leave the bar, you will be asked to wear a frightening mask and not to speak. These rules are essential to the experience. It’s an effect with a huge emotionally pay-off. You become a conspirator. Know that in this role, you will find yourself in some uncomfortable positions — in the thick of unwieldy crowds, in the path of dancers, disoriented and in the dark. You should also be prepared for full-frontal nudity with no barriers between you and the performers, for some shocking images and for strobe lights.

Finally, you will be told that you are a detective here to solve a mystery. Know that the plot is far from literal and concrete and the mystery is not meant to be solved. 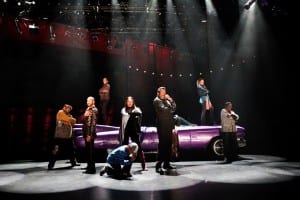 “The Best of Both Worlds,” written and directed by Diane Paulus, with book and lyrics by Randy Weiner and music Deidre Murray, is described as an R&B and Gospel musical, which tells the story of “The Winter’s Tale.” Its genre is more accurately described as blacksploitation operetta. You simply have to be prepared for this if you’re going to allow yourself to be engaged. This piece, the least experimental and ultimately least successful of three, is meant to be light-hearted, but relies heavily on ugly African American stereotypes written clumsily by white people.

You will, for example, see the "clown," here a homeless man called "Sweet Daddy," spend his sudden fortune on a brothel, in which you will see the cast lose the limited dignity they were given as the "royal court" of a famous soul singer (Greg Baker as Leontes stand-in, Ezekiel) portraying ghetto pimps and whores. The excuse may be comedy, but laughs are in short supply.

If you can handle this, you will certainly hear some top-notch singing. Particularly impressive are the operatic gospel of Jeanette Bayardelle as Hermione stand-in, Serena; the superfly falsetto of Darius de Haas as Polixenese stand-in, Maurice; and the solid soul of Cleveant Derricks as Sweet Daddy.

You will also get the full story of the Winter’s Tale and you may very well gain some insights into the play by seeing it transformed into another genre. Gospel is certainly articulate and powerful on the plays central themes around faith, redemption and rebirth. The play’s dialogue is stripped of poetic verse, but translated into an equally heightened (yet perhaps more accessible) form. Particularly stark in this production are the drama of an abandoned child and a mother with restraint as deep as her sorrow.

“Shakespeare Exploded” is the premier undertaking of Diane Paulus, the Harvard alum who largely made her name directing musicals and operas and has been installed after a turbulent year under a caretaker administration. To her credit, she has been introducing herself extensively and articulately in interviews, promotional materials, after-show talk-backs and, this past Saturday, at a free panel discussion along side esteemed Shakespeare critic, Harvard professor and author of Shakespeare and Modern Culture, Marjorie Garber, and also Oskar Eustis, head of the revered and revolutionary Public Theater in New York.

Billed as a discussion of "Shakespeare in contemporary culture," the dramaturg-moderated panel was actually a chance for Paulus, with the aid of friends, to put Shakespeare Exploded into context and answer some questions. In describing her vision for the series and the season, she conjured a younger, less-stodgy and more populist vision for the A.R.T. than some of her recent predecessors, focusing its experimentation more on inclusion and the shattering of boundaries than simply on pursuing the esoteric avant garde in making canonized plays modern.

“The Donkey Show” and “The Best of Both Worlds,” both directed by Paulus, are certainly experiments in inclusion and attempts to appeal to younger more diverse audiences, but they also veer into fluff and spectacle over substance. It is perhaps with this fear in mind that Paulus was bookended by Garber, an academic apologist who built a course curriculum around the productions.

Garber made many deft moves. She unified the three plays as essentially about dreams and visions. She reminded the audience that there are no pure, definitive text of Shakespeare plays — that they were edited throughout their original runs and that t any attempt to stage Shakespeare is a work of adaptation. She was particularly interesting in analyzing The Donkey Show, speaking on the effect of leaving one world and entering another by stepping over the velvet rope and the effect of people form different backgrounds mingling in a state of equality imposed by music, drugs and heightened sexual desire.

Many of the most useful lines came from the outside, Oskar Eustis, the heir to Joseph Papp who first brought free Shakespeare to the New York masses in the 50s. As an immigrant, Eustis reminded us, Papp saw the history and cache of Shakespeare as a passport to American culture. Although Eustis did make this point, the danger with adapting Shakespeare it can be flaunted to ill effect — used to sell something foreign to its actual power as art. This could certainly be applied to “The Donkey Show.”

Eustis also reminded us that the thing that truly raised Shakespeare’s plays to the level of greatness was their audience. They were born of a need to entertain one of the most diverse audiences in history and that is the key to their universality. The A.R.T. must have the same goal, and it’s up to us, the audience, to keep it honest.

A good start is to acknowledge the boldness of “Shakespeare Exploded” and the virtue of its drive toward inclusion and the right kind of experimentation, while also acknowledging the times when it veers off course: when it references poetry and then offers only spectacle or flat prose, and when its analogies tragically misfire.