CELEBRATION, Fla. — I tell people I’m from Orlando. All of us do.

The second the word "Celebration" escapes your lips, you start to raise some serious questions. Yes, Celebration, Florida is a real place. Yes, I grew up on Disney property. No, I am not an animatronic Disney robot. If I am, they did a great job of making me lifelike because I am freezing my little robotic ass off right now in Boston.

I moved to Celebration when I was 11, right as the school was being built and Walt Disney’s picture was still up on the wall. Celebration was designed to be the real EPCOT — an Experimental Prototype Community of Tomorrow — where residents could work, eat, sleep and die all in the same place without ever leaving. Sometimes I feel like I grew up in either the 1950s or on “The Truman Show.”

And then I moved from "Pleasantville" to Somerville.

I’d always wanted to come to Boston. Mainly, I blame Celebration’s Town Tavern, which was the only place in town to hang out once you turned 21. The Tavern was like a home away from home, with Celtics and Red Sox gear on the walls and the "Boston Garden" patio. It seemed so great, but I forgot to take two factors into account. First, I was always drunk when I was there. Second, we had the heat lamps on once it reached 60 degrees. So did I know what I was in for? No. Not really.

But during the holidays, there are always parts of my new place up north that will remind me of home.

Yes. This rumor is true. They pump out fake snow in the streets of Celebration during the winter. We needed something to keep us feeling festive in between the holiday decorating contest and the Radio Disney Holiday Concert in the middle of town.

Sure, you could bide your time watching that house that has their Christmas lights synchronized to holiday music. Or you could ride in the little toy train around the lake in search of Santa Claus and alligators. 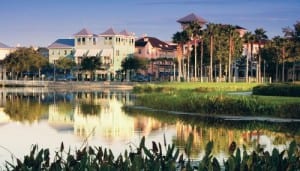 But nothing beats fake snow.

Last winter was the first time I’d ever been freaked out by going home. As I sat drinking a glass of wine with a friend on Market Street, a loudspeaker made an announcement to the throngs of tourists gathering on the street.

The voice in the loudspeaker proceeded to get the entire street of people to wish as hard as they could for world peace and for dreams to come true. And then it happened. It snowed.

After experiencing real snow for a full winter, it was strange to sit on Market Street and watch perfect flurries fall from the sky while I was wearing a tank top.

Sidebar: For those of you back home who have never seen snow, it’s a lot like cold sand from hell. But in a good way.

Celebration snow is not actually snow. It’s what residents refer to as “snope,” a flurry of soap bubbles designed to look like snow that conveniently melt into the sidewalk after 10 minutes. No windshield scraper needed.

It might not seem so magical once you’ve moved north and have had to shovel off the top of your car, only to find a dozen orange parking tickets frozen to your windshield.

But all in all, it’s pretty much the same thing.

Keep wishing for snow, Little Girl. But snope is so much better.