The Tekken series has had a long and illustrious history on Sony platforms and in dank, dark arcades the world over. The latest in the line is cross-platform, but doesn’t make too many other deviations from the strict formula the series has been sticking to for years. For fans of the fighting series, that’s not a bad thing, and as far as Tekken games go, the sixth time is certainly a charm.

The endless stream of fighters that hit during the 90’s have managed to either steadily evolve or perish. Tekken has long been a mainstay on Sony’s platforms, starting with a killer port of the original arcade hit on the PSOne. Tekken 6 was built to take advantage of the latest uber-hardware and as expected, it really does look great and the animation is stunning. That’s not to say it’s visually perfect. The game still has a few unwanted last-gen leftovers like slight jagging outlines of the character, bit overall, Tekken 6 is easily the best the series has looked and certainly competitive with the latest Virtua Fighter, DoA, and Street Fighter IV. The game sounds great as well, with some surprisingly powerful surround effects.

Beyond the presentation, however, there’s not a lot of major upgrades. Although many of the old characters have been tweaked in some fashion, there’s no earth-shattering changes. There are several new characters such as the beautiful Zalina who uses a bizarre style, crazy school-girl android Alisa, and Bob, an amazingly fast far guy. The new characters are surprisingly fleshed out and refined, and add more than just a few more headshots to the 41 character roster. 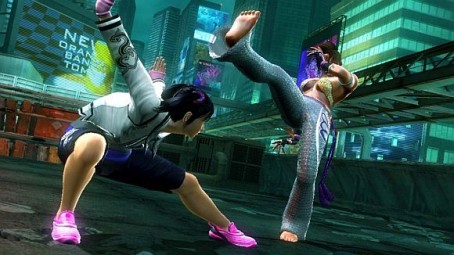 Veterans of the series and hardcore fighter fans will get more out the more subtle gameplay enhancements, yet Tekken remains a remarkably novice-friendly affair as well. There’s an in-depth training mode to learn the ropes, and the classic four-button layout still makes for fast, fluid combat. That said, like most Tekken titles, Tekken 6 has a couple amazingly cheap boss battles in the arcade mode, which will cause even advanced players frustration.

Tekken 6 also tries to alleviate a major problem in all the Namco fightersâ€”one dimensional arenas. While the fighting zones are still flat planes, there’s some real creativity in their presentation including a parking garage covered in flames. New to the series are multi-level arenas. Set up your opponent right through the use of new juggle and ground pounding techniques, and you can smash them through some arena floors. Granted, Mortal Kombat 2 did this in the mid-90’s, but given how slow these games can be to evolve, it’s a welcome gimmick. Now they just need to learn how provide elevation and contours to their arenas like Virtua Fighter and Dead or Alive… 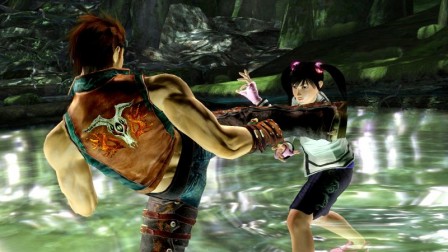 Beyond mere one-on-one fighting, the Tekken Force mode makes a resurgence in the form of the scenerio campaign mode. This single-player, story-driven mode takes the classic side scrolling beat ’em up gameplay of previous games in the next gen with sharp graphics and plenty of action. Unfortunately, the mode has a terrible camera and no way to manually adjust your view. The enemies and action are also incredibly repetitive, but the mode does allow fans to delve more into the nearly incomprehensible  storyline. More importantly, it lets you earn bonus objects to accessorize the fighters with. A real sore point with this mode is despite the fact that you always have an AI companion, there’s no actual cooperative play option.

Online action comes in two different forms. The first is standard online matches against live players. While Namco has announced patches, at this time the online play is noticeably spotty. Although not unplayable, it’s hard to imagine why this is still an issue for Namco given how smoothly Soul Caliber IV works online. The other net-based feature is the ability to download player ghosts, which gives the illusion of fighting a real player without actually having to deal with one.

Blast Factor: Tekken 6 is, without a doubt, a great fighting game. It’s the most expansive Tekken yet, with a great roster, impressive levels, and plenty of gameplay tweaks. That said, it’s hard to outright recommend it to casual players or newcomers to the series, since Tekken Dark Resurrection is a far cheaper download and still a remarkably solid fighter. The $60 price tag here seems a little steep for anyone other than a diehard fighter fan, but price aside it’s a worthy addition to any fighter’s collection.

Tekken 6 is available on the Xbox 360 and Playstation 3 for $59.99. A copy of this game was given to us by the publisher for reviewing purposes.