It’s rainbow time! Rainbow Islands, one of the world’s most underrated platformers, has now made its way to the Xbox 360 via the Xbox Live Arcade. For those who are unaware, Rainbow Islands is a sequel to the immensely popular Bubble Bobble, which was initially released in 1987 for the original Nintendo Entertainment System, among many other platforms.  Though I would be hard-pressed to say that Rainbow Islands is cuter than Bubble Bobble, this Taito Corporation title gives everyone its share of warm-and-fuzzies.  Hell, even the rating is cute: E for Everyone due to “Comic Mischief”. 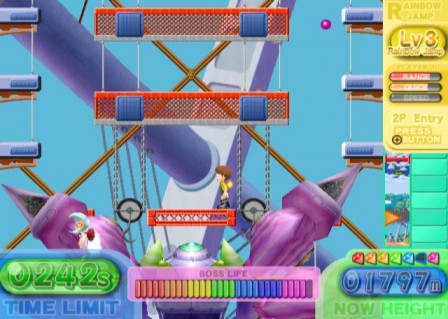 The basic premise of the XBLA release, Rainbow Islands: Towering Adventure!, is similar to the original in that you must make your character climb as high as he can to escape the sinking city within a certain amount of time.  Using magical powers to create rainbows, players will be able to jump higher and higher, while also attacking dangerous enemies (such as caterpillars, mini-tanks and giant blue bees!) in the process.

What I really like about Rainbow Islands: Towering Adventure! is the fact that your character has no life meter, which has been replaced with a timer.  This timer counts down for every second spent enjoying the rainbow-ey goodness; when the timer runs out, the game is over.  Instead of losing life, being attacked by enemies results in a subtraction of time.  Likewise, when a player defeats an enemy, their character can collect not health, but more time.  I thought this was a very fun and imaginative way to make a game finite without bringing the whole life-and-death scenario into play.

Another somewhat unique thing about Rainbow Islands: Towering Adventure! is the fact that the rainbow magic can be used as both a climbing tool and a weapon against the evildoers that have overrun the town.  This becomes especially helpful when a platform you are jumping to is a bit out of your jumping range as you can just shoot a rainbow, use it as a stepping stool and be on your merry way.  Advantageously timed rainbows will allow players to jump higher, get rid of enemies and let your character collect the bonuses your fallen foes have dropped. 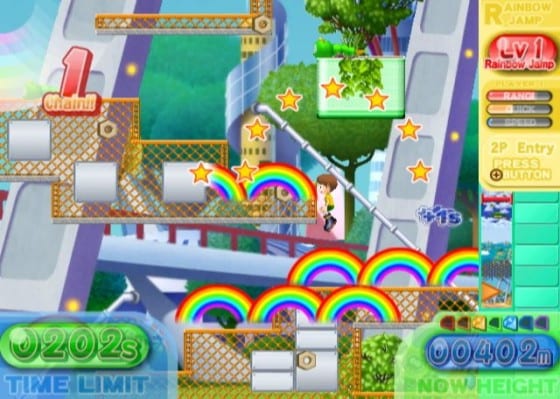 Rainbow Islands: Towering Adventure! is also full of entertaining game modes as well, complete with Story, Challenge, Time Attack and Xbox Live Match modes.  In Story mode, players take control of Bub and Bob, whom were also the protagonists in previous games.  Bub and Bob must escape the city before the evil Dr. Crescent submerges it compeletely.  Bub and Bob will be able to collect gems throughout the game that will help them do a super move that can combat Dr. Crescent and his large destructive ship.  This mode can be played in single player and two-player cooperative styles.  In Challenge mode, players simply try to get as high as they can with a set number of lives, while Time Attack mode tests players’ speed by seeing how quickly they can complete a stage.  In Xbox Live Match mode, players race against other Xbox Live users on certain levels.

In the Challenge and Time Attack modes, players can actually use their Xbox Live avatars to take part in the action.  Unfortunately, those are the only modes that this feature is available in.  One could imagine that letting Xbox Live users incorporate their avatars would increase the entertainment value of both Rainbow Islands and the avatars themselves, but obviously the developers seemed to go in a different direction.  To many, this will seem like a pretty simple idea that was just not capitalized on for whatever reason.

In terms of aesthetics, this game brings as many colorful graphics as you would expect from an old school Japanese platformer inspired by rainbows.  At first look, players may confuse this title with one of the Sonic games for Sega Genesis as they seem to be designed with very similar graphics and stylization.  Each of the levels has many different shades and tones of pastels, while the enemies look like cute and colorful toys in lieu of anything threatening.  I wouldn’t consider this a negative, however, as I think most of use fell in love with Bubble Bobble for more than its gameplay. 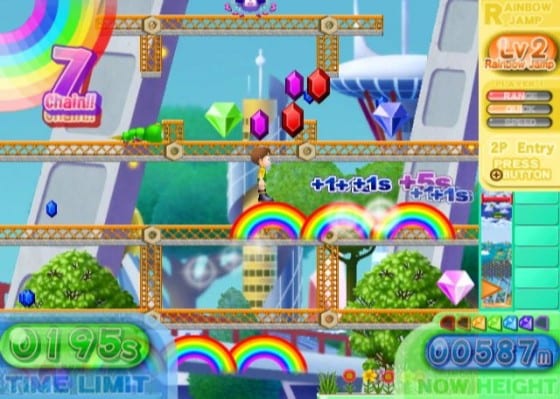 Blast Factor: Overall, Rainbow Islands: Towering Adventure is as cute a game as you’ll find in the Xbox Live Arcade.  However, with flaws in the aesthetics, gameplay and general development of the game, it’s hardly the best value one can find.  For fans of the original, coughing up 800 points (about $10) will probably not sound too bad.  For everyone else, it’s probably not worth it.

Rainbow Islands: Towering Adventure! is available for 800 Microsoft Points on the Xbox Live Arcade. A copy of this game was given to us by the publisher for reviewing purposes.