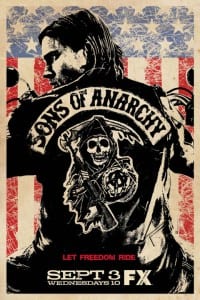 The 90-minute season finale of “Sons of Anarchy” drew 4.33 million total viewers, making it the best-rated episode ever for this series, now through two seasons. FX announced it has ordered 13 episodes for the third season, which we’ll have to wait until next September for.

ABC is moving “Ugly Betty” to Wednesdays at 10 p.m. as of January 6 as part of ABC Comedy Wednesday. “Shark Tank” comes back to ABC on January 8 at 9 p.m.

Syfy has another new whimsical comedy series. “Outer Space Astronauts” premieres Tuesday at 9:30 p.m. The series was created by Russell Barrett, who developed the series at his home using computer graphics. It’s a five-par series airing Tuesdays at 9 after the first episode.

Bravo will sign on for a third season of “Shear Genius” starting in February.