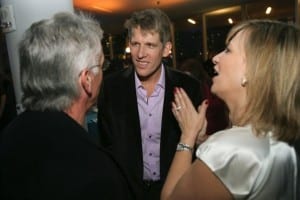 “There are 30 million children in our country who have no contact with their fathers,” Tom Matlack says. “No matter your political point of view we can all agree that the lack of male role models, particularly for young men, is a crucial issue facing the future of our country.”

Matlack is the co-founder of The Good Men Project. Here is what he has to say:

BLAST: What inspired you to start this project?

TOM MATLACK: In 1996 I was CFO of The Providence Journal Company. I took it public and sold it for $2 billion in 90 days. Just after announcing the deal my wife kicked me out for being a drunk and a cheat, leaving behind a 3 month old son and 2 year old daughter. I found myself in a church parking lot calling my mom to explain how I had gone from wunderkind to homeless in 48 hours. That was the toughest phone call I ever made. Everything that has followed has been an unmerited gift.

BLAST: What does it mean to “be” a good man?

TM: Every man has to figure it out for themselves. For me it means loving my (second) wife Elena passionately, caring for my 3 kids, and doing something for someone other than me. My experience is that listening to other guys tell their story, and ultimately telling my own, is the way to figure out what it means.

BLAST: Who are some good men in the Boston area?

TM: Ray Allen is my favorite. I was doing a story about the Celtics and was in the locker room. No one would talk to me. Ray looked me in the eye and asked me who I was (nobody) and what I wanted (to write a silly story about their Russian trainer). He put his shorts on, sat down and talked to me about life for half an hour. My interview was over 5 minutes into the conversation.

BLAST: Did one of the stories in the book touch you the most?

TM: Julio Medina. He was in Sing Sing for life as the kingpin of a huge drug gang. When guys get stabbed in prison you run the other way. Blood on your uniform means you will talk and get stabbed or refuse and go to the box. Julio had run away from stabbing dozens of times. This one time his friend was bleeding out in front of him. He couldn’t step over his brother’s blood. He picked him up and held him. And his life has been changed forever. He is my personal hero.

TM: Dude, we are completely screwed right now. Someone had to come clean.

BLAST: What do you hope to accomplish with The Good Men Project?

TM: I want men they are not alone. I want women to know there’s more than they know about us. I want to help the 30 million children in our country who have no father.