NEW YORK — It’s with some hesitation that I describe The Bloodsugars as an indie band from Brooklyn — even though they are — for fear that they will be lumped in with Dirty Projectors, Grizzly Bear, and the rest of the seemingly infinite lineup of artistes du jour from the borough.

But before you give in to the knee-jerk, eye-rolling, "Next!" reaction, know this: The Bloodsugars, for all intents and purposes, are not your typical Brooklyn indie band. For one thing, they know how to have fun. They aren’t above writing straightforward, catchy pop songs. Rather than co-opting and trying to re-fashion influences from past decades, The Bloodsugars proudly wear their musical inspirations on their sleeves, as evidenced by their debut full-length, I Can’t Go On, I’ll Go On, which was released Nov. 17. (Also, your parents might like them â€” as I discovered this past Thanksgiving.)

I Can’t Go On, which borrows a phrase from Samuel Beckett, is an aural time machine, transporting the best elements of songs from the â€˜70s and â€˜80s and melding them seamlessly with components of modern funk, R&B and electronica. If Toto and Paul Simon procreated, for instance, it might sound something like the handclap-heavy "The Pedestrian Boogie," while the falsetto chorus of "Girls At" seems like it was transported from the â€˜70s. 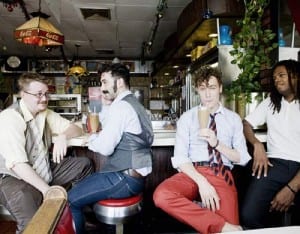 Bloodsugars frontman and chief songwriter (and diabetic, hence the band’s name) Jason Rabinowitz allows his velvety vocals to be buoyed by the backing music rather than overshadowing his bandmates, who more than compensate for whatever he may lack in range. Keyboardist Matt Katz adds an extra dimension to songs like the calypso-esque, earwormy "Happiness" and the wistful "I Want It Back." And look no further than the wonderful, play-on-repeat-worthy first single and lead-off track "Light at the End of the Tunnel" to showcase the tight rhythm section of bassist Brendan O’Grady and drummer Kenneth Salters.

Though Rabinowitz occasionally veers into cutesy territory ("If I knew where you lived, I’d move to your neighborhood," is the album’s second line), his lyrical prowess really comes through on more sentimental tunes like the tender album closer "Before the Accident." Like the record and The Bloodsugars themselves, it’s sweetness with just the right amount of spice.