This article was reported by Lauren McCombs, Jessica Elford and Pasquale Augustine. It was written by McCombs.

LA JOLLA, Calif. — Power Behind Closed Doors recently interviewed Dana Stewart, an expert in the field of alternative energy and a writer and promoter of green technologies for Alliance BioConversions Corporation.

Why do we seem to be feed only two choices in the energy industry: the economically sound or the ecologically devastating? According to Stewart, we can and should make our own energy, and we should clean it up ourselves. 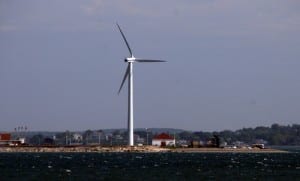 Take for example, two diametrically opposed energy sources. Stewart says that a recent brouhaha that has erupted over the merits of Wind Farms versus Mountaintop Coal mining. She believes that neither energy sources are real answers to our energy needs and environmental concerns. Instead, these industries spend enormous sums of money to market and convince the general public of the "greenness" of their individual products and processes. She believes that both of these concepts are severely damaging to the overall environment.

Stewart said that destruction of the environment by coal mining of any type is well-known, and sites the history of coal slurry disasters, some of the biggest disasters in the nation’s history. To her, “Clean Coal” doesn’t exist and wind’s not the solution either.

Wind farms, an industry that until recently was viewed as the epitome of ecologically responsible green technology, have efects on the environment in terms of their equipment manufacturing process, field installation and the actual operating experience.

"Take California for example,” said Stewart, "where 4,000 windmills produce less than 1 percent of the energy used — an inefficient manner, causing additional polluting, and of course (it) results in higher energy costs. An overview would indicate that these are the wrong design in the wrong places at the wrong time".

Stewart said it is possible to solve over 95 percent of America’s pollution and energy problems without toxic chemicals. “One of the keys to success is the concept of Point-of-Purchase Power,” she said, “which means building–integrated energy systems, and producing what is needed as closely as possible to where it will be used. I believe that this is the fastest, cheapest, and cleanest way to achieve the U.S. national security objective of energy independence which can be stated as."

Of course, only public opinion can change public policy.

Says Stewart: We need “a 12-step program to prevent the worst hangover from our addiction to fossil fuels that has ever been imagined."

Stewart said that it is time for a united effort to truly “go green to make green” and to restore the Earth. Power Behind Closed Doors applauds her dedication.

But with all the responsibilities on the shoulders of Americans already, with work and family demands, how can we move ahead?

We need to, as a country, find a feasible way to end our dependence on foreign resources and end the energy crisis. Everyone can agree that we don’t want to pillage the planet. Are any global environmental pacts, including the current Copenhagen Deal, the way to go? Binding agreements set off waves of alarm bells to those against a one-world, one government approach. Giving up sovereignty for the greater good has benefits and costs. Can we ever set a global standard that reflect true progress? Then will we be able to use the most efficient, most economical technologies to peruse this goal?

It is possible, and is being done at the University of California San Diego, the leading college in the country for sustainability. UCSD has also received one of the largest chunks of the solar stimulus plan, because of its proven ability to create change and a profit. Now how does the rest of the country and business turn a goal into a profitable market?

Dana L. Stewart is chairwoman and a writer and promoter of green technologies for Alliance BioConversions Corporation and A Development Alternatives Network and Alliance. She is also the marketing director for Golden State Solar Electric and a board adviser for the Universities Media Alliance. She can be reached at [email protected].