NEW YORK — Though the Toronto quintet Still Life Still have been playing together in one form or another for 10 years, they just released their debut LP this past August. And even that came about practically by accident.

"We just hit the studio to demo," drummer Aaron Romaniuk told Blast in an interview during last month’s CMJ Music Marathon. "We weren’t even using our own gear."

The one or two songs they were slated to record eventually expanded into their first full-length: "Girls Come Too."

Still Life Still’s sound is louder and catchier than that of most of their labelmates on Canadian powerhouse label Arts & Crafts. With influences that include Animal Collective and Pavement, they blend a shoegazer sensibility with plenty of pop hooks. 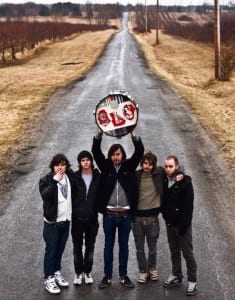 Growing up together in East York, Ontario, the four founding members were just 13 when they decided to start the band on a whim.

"We just bought instruments and decided we were a band," said guitarist/vocalist Eric Young. "We didn’t even know how to play them."

They appointed Brendon Saarinen lead singer, since he had some minor guitar experience and had already written a few songs.

"He read me one of his songs at lunchtime at school," Romaniuk recalled. "I was like, â€˜We’re gonna be rich! This is fantastic!’"

Although fame and fortune didn’t find them immediately, the group (Romaniuk, Young, Saarinen and bassist Derek Paulin) began playing local bars â€” as soon as they were old enough â€” and eventually began recording demos, none of which they bothered releasing.

Saarinen is a prolific writer who’s penned thousands of songs, some of which he uses in a separate solo project, his bandmates say.

"If he didn’t write, he would go crazy," according to Aaron Romaniuk.

Romaniuk convinced his brother Josh to join the group about five years ago, rounding out the current lineup.

"I was just always around," explained Josh, who handles keyboards and percussion.

"We let him in on the tambourine and he worked his way up," his brother quipped.