Borderlands is not what I would describe as a complex game. You get guns, you shoot those guns, and you pick up what the people on the receiving end of those gun’s bullets drop as they die.  Sometimes, if you’re lucky, that’s more guns! You do this, over and over again, for maybe 30 hours, assuming you put time into leveling and fulfilling the sidequests. Despite its simplicity though, it works, and you will want to play the game all the way through. There’s nothing quite like a loot-based game that draws you in, and that’s just what Borderlands is. This is, quite simply, Diablo with guns. It’s not a first-person shooter so much as it’s an RPS–a role-playing shooter.

I wasn’t kidding when I described the gameplay above. That’s the bulk of the experience. You get missions to do from job boards in towns and settlements, or from talking to certain people scattered across the expansive game world. When you finish a mission, you return to wherever you earned it and pick up a reward, in the form of items, experience and money. You can take on as many quests as you want at a time, and can complete as many as you want before you ever return to claim your prize, so you don’t need to run back and forth constantly. These missions do fall into a somewhat small set of categories though–kill this thug, kill this beast, collect these items, kill this guy and collect these items, etc. You don’t really mind though, because each kill means experience, and experience means leveling, and that is the metaphorical crack pipe upon which addiction to this game relies.

Even within the first area of the game, there are certain sections you are not going to want to visit until you have sufficiently leveled. You may find some of these places in your random travels though, and when you do, you could very well be killed, and fast. You want to be very close to your enemy’s levels when you engage them, so the missions become important so you can always stay ahead of the curve, or at least with it. 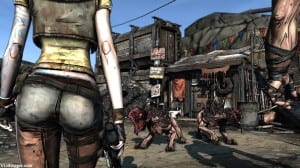 Plus, you get more stuff. There’s a never ending supply of stuff for you to pick up. Some of it is better than your current stuff, much of it is worse, but it can all be sold so you can buy even better stuff. Certain characters use certain gun types better than others, meaning that when you play multiplayer, stuff should be shared for more reasons than just fairness.

The single and multiplayer experiences are similar in many ways. You still run around completing missions, leveling up and collecting loot, but now you get to do it with a buddy (or a stranger, but that’s not as much fun, especially in a game where picking up items is so pivotal). If you play with someone over Xbox Live, whoever hosts the game is going to be the one whose story is played, meaning you can replay missions you may have already completed in order to boost your character’s levels further. You can also keep multiple characters saved to your hard drive at once, meaning you can play online with a friend using one of the four character classes while playing alone on your own time with another. All of the items, experience and money you acquire in multiplayer carries over to your single-player experience, so even if you have to replay certain sections later, at least you will be well armed. 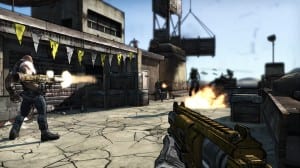 Each class is, at the simplest level, different thanks to their special skill. The Soldier drops a shielded turret, the Hunter has a war hawk that can attack far off enemies or those behind cover, the Siren can turn invisible and invincible for short periods of time, letting out a wave of energy when the shift occurs, and the Berserker, which, as you may have guessed, excels at being a damage absorbing tank that can punish enemies with melee.

There is more to the class differences than that though, as you earn skill points that can be used to differentiate them further. There are three separate paths to take, and you don’t need to stay within a single one–you can also cash in all of your skill points and re-align yourself however you wish, for a small cash fee. Let’s use the Hunter as an example. One path has him becoming more of a pistol wielding gunslinger, while another has him becoming more of a sniper. If you take the Sniper path, you will earn bonuses through skill points for things like experience bonuses on critical kills, faster reload times on rifles, or shield penetrating bullets. If you take the gunslinger route, you can get some similar bonuses, but also some very revolver/pistol exclusive ones, like chance to fire two rounds with one press of the trigger on pistols. You can customize them into all three groups and get an all-purpose blend, or you can focus heavily on one section–each time you upgrade a skill five times, it opens up the next level of skills for that designation. Shield penetrating bullets don’t come for the Sniper until you’ve used at least 15 skill points on Sniper related skill, which means 15 levels (20, really, as you don’t earn any skill points your first few levels) in a game with 50 tops. As I said though, you can get them back for a cost, so don’t fret if you change your mind 15 hours in.