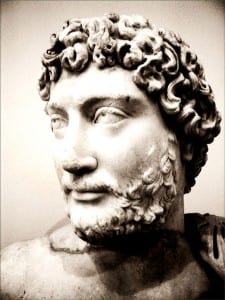 ROME — As is known, Rome never stops surprising us, and the treasures that are still covered by layers and layers of earth, streets and pavements are hardly imaginable.

The most recent and rather important discovery is the white marble flight of steps found during excavations undertaken in the course of archaeological surveys for Line C of the underground railroad in Piazza Venezia.

After the discovery of the building that perhaps supported Nero’s rotating dining room on the Palatine, excavations for Line C of Rome’s subway brought to light a building that, according to the first hypotheses made by archaeologists, is thought to be Hadrian’s Academy, built in 133 A.D. to host poets, rectors, philosophers, men of letters, scientists and magistrates.

Hadrian, or Publius Aelius Hadrianus, ruled from 117-138 AD. He was an avid philosopher who was commonly referred to as one of the “five good emperors.” Hadrian’s Wall, in Northern England was built after a great war in what was then called Britannia.

It was an unexpected find as there is no trace of this building even in the Forma Urbis Romae, the map of ancient Rome engraved on marble slabs in the days of Septimius Severus (2nd Century A.D.). One of the sources used by archaeologists is the archaeological map created in the early 20th Century by the scholar Guglielmo Gatti. On this map Gatti in fact rediscovered a late-ancient domus and a little further south a number of monumental structures, which were really therefore the beginnings of the now hypothesised Athenaeum.

At the center, where the emperor and the poets wrote verses, is a granite floor with ochre coloured listels. These are the same kinds of floors used for the libraries Hadrian had built to the sides of Trajan’s Column fifty meters further along.

Now, the hypothesis that the Athenaeum may be in that never previously excavated corner of Piazza Venezia is extremely fascinating for history, archeology and architecture buffs.