When Activision first gushed details on the kid-friendly "Hero" title, Band Hero, I truly wondered if the franchise had teetered over the ledge and into the abyss of total music-game proliferation. For goodness sake, 2009 alone played host to core installment Guitar Hero 5, as well as spin-offs Smash Hits, Metallica, and Van Halen. With the addition of Band Hero, the number of Guitar Hero titles in 2009 jumped to five, but what is the fifth one? How does it play? And why should you buy it?

Band Hero is Activision’s answer to LEGO: Rock Band and aims to corral and persuade the pop-loving, teen masses into grabbing a plastic instrument and rocking out with friends. The game features tunes from uber-mainstream acts such as Jesse McCartney, Taylor Swift, The Spice Girls, and loads more songs you likely never imagined you’d play in a Guitar Hero game. 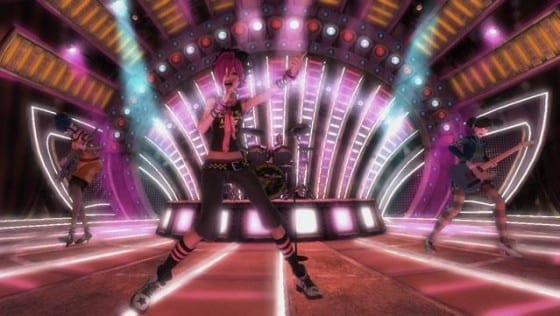 There isn’t a heck of a lot about Band Hero that wasn’t covered in our hands-on preview, but now that I’ve jumped into the game for hours instead of minutes, there’s a little more to talk about.

First off, don’t expect anything different or significantly improved in the visuals department. Band Hero looks exactly like Guitar Hero 5. But this is not a detriment whatsoever. Guitar Hero 5 was the most phenomenal looking Hero title we’ve ever seen, and the minor tweaks Band Hero adds, only bring out the power of the engine that much more. 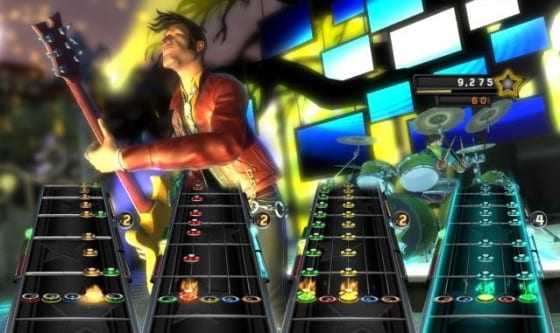 The game features every game-mode found in GH5, but has one significant addition- Sing Along. In this mode, Band Hero essentially morphs into a gorgeously rendered karaoke machine where up to four participants can simply sing along to any of the game’s tracks. The best part? Only one microphone is needed. Now, for me personally, this addition didn’t add anything. But, fill a room with little girls, and turn on "Love Story" by Taylor Swift, and well, it’ll be a different scenario.

The meat, however, of Band Hero, as with any music-game, is in its song list, and on this account, Band Hero excels. There are 65 on-disc tracks and all the downloadable content you’ve got on your hard drive also works in the game. For me it was rather comical seeing tunes from Metallica next to those of Dashboard Confessional, but hey, it works! 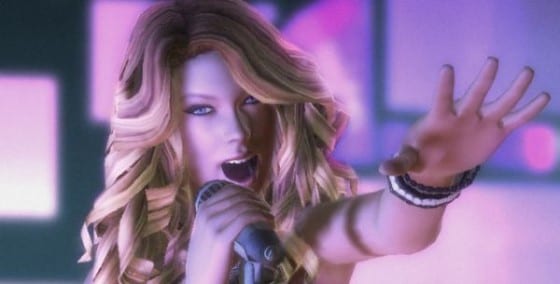 The tunes (here’s all 65), as previously noted, include radio friendly cuts from artists like Hilary Duff, Taylor Swift, The Spice Girls, Jesse McCartney and Fallout Boy. But the game also incorporates classics like "American Pie," in all its nine-minute glory and "ABC’s" from the Jackson 5.

Personally, I feel that Band Hero is a "guilty pleasure" music game. It’s hard for me to admit I enjoy listening to Taylor Swift, but when I’m actually actively playing along to her tunes, it’s a little different. Maybe you wouldn’t openly admit to enjoying these songs per se, but when they’re wrapped into a video game, something changes, and they become very much alright.

Of note: What I’ve always found interesting when comparing the Rock Band and Guitar Hero franchises are the differences in note charts of the same songs in both games. For instance, Dashboard Confessional’s "Hands Down" is in both Rock Band and Band Hero. However, the song plays far more simply in Band Hero, and speaks to Activision’s determined effort of accessibility over genuine (as as much as can be expected) musicianship, a gameplay facet that Harmonix tirelessly works to effectively recreate in its game.

Good job Activision, you prevented some kid asking his or her parent "What’s a notch in a bedpost mean?"

Blast Factor: Band Hero is a phenomenally fun music-game. It doesn’t add a heck of a lot to the genre, but it remains cemented in excellence in gameplay, and the addition of Sing Along mode is gem hidden in the game that Activision simply did not hype enough. The 65 on-disc tunes are very surprisingly varied and altogether comprise a very wholesome attack from Activision at creating more than just a "kiddy" Guitar Hero title. In-game appearances by Taylor Swift and Maroon 5’s Adam Levine add a level of “whoa cool” to the game.

Band Hero is available for the PS3, Xbox 360, Wii and Playstation 2. A copy of the game was given to us by the publisher for reviewing purposes.