The black Labrador retriever, who was trained to detect improvised explosive devices in the Oruzgan province, was recovered by a US soldier at an isolated patrol base recently. 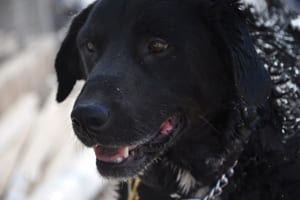 The US soldier, known only by his first name John, was aware his Australian Special Forces colleagues were missing one of their explosive detection dogs.

John said it was immediately obvious that Sabi was no ordinary canine.

"I took the dog and gave it some commands which it understood," he said.

At the time of her disappearance Sabi was coming to the end of her second tour of duty in Afghanistan, having previously deployed to Oruzgan in 2007.

Sabi was declared MIA in September 2008 after the combined Australian, US and Afghan National Army convoy was ambushed by an insurgent force.

After more than a year in South Afghanistan, Sabi was flown to Tarin Kowt to be reunited with one of her Australian Special Forces handlers, who knew instantly it was the team’s missing dog.

"I nudged a tennis ball to her with my foot and she took it straight away. It’s a game we used to play over and over during her training," the trainer said.

"It’s amazing, just incredible to have her back."