It’s funny how similarly movies and video games can evaluated; both can be judged based on action, suspense, storyline, acting and, most of all entertainment level. Yet, when it comes to the creation of sequels, films consistently get worse and worse as the try to build on the residual plot, while video games seem to only get better.

Case and point (at least for the video game side of things): Call of Duty: Modern Warfare 2.

Perhaps 2009’s most anticipated game, this Infinity Ward production has only gained hype as the holiday season approaches nearer and for good reason: Modern Warfare was a hit, both in the multiplayer and campaign aspects. However, fans and critics seemed to agree that Infinity Ward would be able to step up their (ahem) game with the second title in the series, even given the seemingly flawless initial release.

And, for the most part they were right. Modern Warfare 2 makes improvements in almost every way. Though covering every new feature and wizbang would be impossible, I do want to focus this review on the three main game modes: Campaign, Multiplayer and Special Ops, a new mode introduced in Modern Warfare 2.

First, lets start with campaign. Infinity Ward made the very wise choice of making Modern Warfare 2 a continuous plot and storyline from the first game, beginning five years after the conclusion of the initial events. Starting with a quick montage filled with video and sound clips from the original release, players will get a quick reminder of the events that took place earlier (though, folks who skipped playing Modern Warfare 1 may be a little lost on the outset of things).

Players take control of multiple soldiers within the campaign (the most memorable of whom is Gary “Roach” Sanderson), while also being whisked away to various exotic settings. Being trained and mentored by high profile NPCs (such as everyone’s favorite Scottish killing machine, Captain MacTavish), the characters in Modern Warfare are quite diverse and offer a wide variety of experiences that players will have to adapt to. Needless to say, Modern Warfare 2 takes care of the goal of making the game challenging and interesting very quickly.

Relative to Modern Warfare 1, the sequel has a much more intense story that goes beyond the standard themes of war, death and ultimate loss. Modern Warfare 2 puts players in the most realistic conflicts and impossible decisions that I’ve seen in a first-person shooter to date. Take, for example, the airport mission. Being enlisted as a undercover agent to befriend the most dangerous terrorist in the world, Vladimir Makarov, players must take part in the most heinous attack I’ve ever witnessed in a video game to preserve your false-identity. This part is so gruesome and powerful that Infinity Ward actually had to make sure to implement a waiver that all players must agree to in order to prevent their customers to get too offended. Given that this waiver is presented when one pops in the game for the first time, players should know right away that they are in for a wild ride. 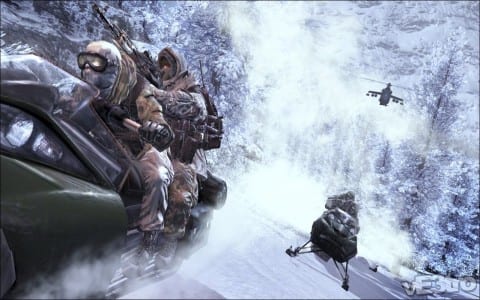 The campaign continues from the airport mission to follow the events and repercussions that Makarov triggers, letting players contribute to the anti-terrorism actions from around the globe. Though, sadly, you never get to be quite as undercover as when you take part in the airport mission, there are plenty of tense missions, expanded gun repertoire and snow mobile chases that are sure to keep players entertained throughout the entire game. I expect some of the sequences and missions will stick in players’ minds for an unhealthy amount of time.

On the whole, the campaign defines what Modern Warfare 2 is: an intense, incredibly detailed game that is full of weapons and unique features. The story in this title is like nothing I’ve ever seen from a FPS and is clearly superior to the very well made original Modern Warfare campaign in almost every way.

Let’s move onto the bread and butter of Modern Warfare 2, the multiplayer mode. When first writing this review, I just didn’t know where to start due to the incredible amount of features included in this mode. So, instead of mentioning every single one, I’ll just do a brief review of my person favorites and least-favorites.

For the pros of multiplayer, Infinity Ward seemed to do a complete upgrade of everything graphical. From the player models to the environments, Modern Warfare 2 blows its predecessor away in the visual department. I was sure to take notice of the shading and texturing of various obstacles (an area I felt was a bit lacking in the original) and, wouldn’t you know it, the game was completely upgraded. Instead of grey, often boring colors, Modern Warfare 2’s multiplayer levels are full of eye-popping colors from every part of the spectrum. Even the bullet hole that players can put in walls seem to have been revamped; that’s how completely improved the game is visually. I honestly think it is worth it to rent Modern Warfare 2 just to appreciate what was done to visually improve it.

The creators of Modern Warfare must have saw the added replay value of incorporating challenges and upgrades in multiplayer modes because this sequel is full of them. Every gun, sidearm and even perk is linked to a few challenges that players can pursue. Also, instead of having a standard amount of upgrades for every weapon, Infinity Ward was sure to differentiate each gun and weapon class more distinctly by not only adding more upgrades, such as thermal scopes and heart beat monitors, but by also encouraging players to test each upgrade out by linking challenges to them. For instance, I recently completed a challenge that involved me getting a certain amount of kills with the heart beat monitor upgrade. Without that challenge, I may never have had a chance to appreciate or even use this unique upgrade.