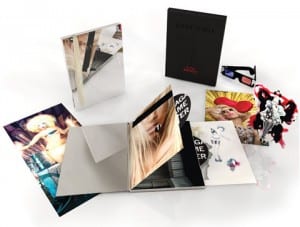 Lady Gaga’s next album, The Fame Monster, will be released in three versions — a standard version of the new 8-song album, a deluxe version which includes both The Fame Monster and her massively successful debut album The Fame, and a collector’s edition super-deluxe art book version, which includes both albums, fanzines, 3-D glasses, paper dolls, a puzzle, pictorials, a lock of Lady Gaga’s hair and other surprises.

“In the midst of my creative journey composing The Fame Monster, there came an exciting revelation that this was in fact my sophomore album,” Lady Gaga said in a statement. “I would not add, nor take away any songs from this EP; it is a complete conceptual and musical body of work that can stand on its own two feet.”