Microsoft today announced that the Fall 2009 Xbox 360 Dashboard update will officially hit Nov. 17 for everyone.

With the update, a triple-shot of social-networking avenues, including Facebook, Twitter, and Last.fm, will hit Xbox Live for all to bask in.

"We’re delivering some truly exciting social entertainment experiences to our members," said Marc Whitten, Xbox LIVE general manager. "Xbox LIVE’s differentiator has always been our community, and we’ve already seen a tremendous response to these features in our public preview. It’s the community that drives us forward and allows us to pioneer new ways of connecting people through the entertainment they love."

So if I have this correctly, beginning next Tuesday I’ll have no reason to leave my Xbox 360 ever? Uh oh. 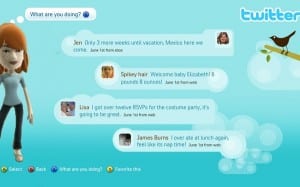