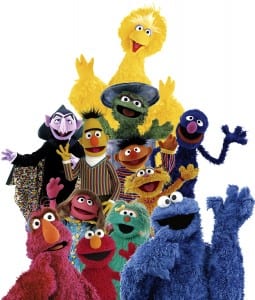 It’s been 40 years since Sesame Street first started educating and entertaining children across the country.

I can think of a few things off the top of my head that I learned about with my eyes glued to the television and my hand in a box of Cheerios as a child: Counting, counting in Spanish, bottle caps, and a mastery of the ABC’s are a few examples.

But here’s one thing I learned about on Sesame Street that you might not think of right away: death.

When Will Lee, the actor who played Mr. Hooper, died of a heart attack in 1982, instead of covering it up on the show or saying Mr. Hooper moved away or went on vacation, the show decided to tell children the truth: “Mr. Hooper died.” They told Big Bird this in the episode “Farewell, Mr. Hooper,” broadcast on Thanksgiving 1983. Later in the episode, Big Bird wants to give all the cast members drawings that he made of each of them. When Big Bird asks where Mr. Hooper is, they remind him that Mr. Hooper is dead, to which Big Bird replies that he’ll just wait for him to come back, so he can give him the drawing. The adults pause and tell Big Bird that when someone dies, they never come back.

It was real. It was powerful in a way that insulating modern television may never be again. It was one of TV’s most important moments, and it would affect me just as much when I saw it for the first time in the late 80s. (I wasn’t born when it originally aired)

But most of my Sesame Street memories aren’t nearly as sad!

It this doesn’t completely floor you, nothing will: (see more here)

Register a free account with Blast, and leave a comment about your best Sesame Street moment for a chance to win a free DVD.