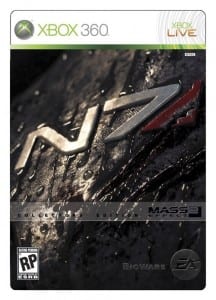 When Mass Effect 2 releases Jan. 26, 2010, gamers can pick up the Collector’s Edition and be treated to the game wrapped in a hard-shell “tin case, a 48-page hardcover “Art of Mass Effect 2” book, Issue 1 of the Mass Effect Redemption comic book, and a bonus DVD with behind-the-scenes and making-of videos.”

What’s more, and more vague for that matter, is the inclusion of “unique in-game weapons and armor,” only attainable through the purchase of the CE. What could it mean?!

“We’re really excited to roll out this Collectors’ Edition featuring so many unique items, including special Collectors’ Edition armor and weapons and content that will surprise Mass Effect fans,” said Dr. Ray Muzyka, co-founder, BioWare and Group General Manager of the RPG/MMO Group of EA. “The limited edition comic book and bonus DVD will really enhance and expand the overall Mass Effect 2 experience.”