Although my 25-year-old brain isn’t entirely sure what I played and why I was playing it, I am pretty confident in saying that Bakugan does not entirely suck.  It is derivative and not really that original, which would be a problem if it were aimed at (allegedly) mature adults such as myself, but it seems fine for its kid to teenage target audience.

My confusion stems from the feel of the story and plot, which is strictly low-quality, Saturday morning cartoon level filler.  You play as a youth who, uh, loves this card battling game that features creatures popping out of balls.  Think Pokemon, but with a bit of a technological and alien bent as opposed to animals.  Your youth is plucky, with a whole cast of stereotypes to help you out – A super cool dude who serves as a tag team partner, an obvious bully and a lackey to fight against, several girls that are cute but have no personalities of their own, and a nerdy kid who is obviously very nerdy because of his nerdy kid glasses.

Although all of the characters are definitely stock, straight from central casting, the voiceover work is done pretty well.  Likewise, the graphics are Saturday morning cartoon, but in the good way – Crisp, colorful backgrounds and good animation on the actual battlefields.  While the voiceover and graphics aren’t selling points, they do not actively take away from the experience.

If you are reading this and under the age of 18, then the above characters and presentation might appeal to you greatly.  If you are not, then you will have to rely on the gameplay, which is so-so.  While there are some fun aspects here and there, the basic gameplay is rather unrefined.

Bakugan is essentially a “monster battling” game, similar to the aforementioned Pokemon.  You create a deck of cards, compromised of three attacking monsters, three base cards and three power-up cards.  At the start of combat, you are transported to an arena, and you have to place down a base card.  You then use the Wiimote to “throw” a ball – one of your attacking monsters – on to one of the base cards placed by you or your opponent.  The control pad can be used to “steer” the ball in the air, and also after it lands.  You opponent then throws, followed by you again. 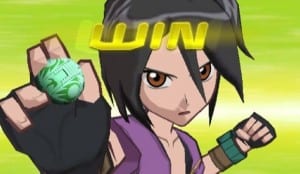 The goal is to win three gate cards.  If you can land two of your monsters on a single gate card, then you can claim it.  However, the main combat occurs when you and an enemy land on the card, which initiates a battle.  Each monster has a “power” level – think hit points – that can be amplified depending on the base card the fight takes place on.  For example, a Holy powered monster might get an extra 50 points for fighting on a Holy battlefield.

There are a few other wrinkles from here.  First, you can use power-up cards to give yourself some extra points.  And second, each battle features one of three mini-games – a rhythm timing game, a shooting game with the Wiimote pointer or a masturbatory shaking – in order to further increase the power level. Whoever has the higher number wins.  There are also power-ups your monster can collect while rolling around the arena as well, to raise or increase the power level, and to debilitate your opponents with annoying status effects.

It’s simpler than it seems, and unfortunately, you don’t need a lot of the extra options, like the movement or even doing well on the mini-games.  For the most part, I was able to accurately throw the balls on to cards with little trouble, with the computer’s success rate was about 50 percent.  I was able to win most of the game’s battles within three to five turns.

This lack of challenge and generally unoriginal gameplay creates a sense of “meh” while playing Bakugan.  It is kind of fun, but my old fogey mind kept thinking back to Pokemon, and how much better that was, even though its prevalent color was an odd sort of green and I played it on the original, chunky Game Boy that now doubles as a paperweight for me.

There are some attempts here and there to prolong the Bakugan experience.  For example, you can purchase new monsters at a store, and like every game of this type, there is an emphasis on collecting every monster, gate card and power-up card.  This will probably only appeal to the few ensnared enough by the game to continue with it though, and it’s not really a drawing point if you don’t like the basic gameplay.  Likewise, tag team, battle royal and multiplayer matches are available, but they’re all just more of the same.

Blast Factor: Bakugan has a very narrow niche in my mind – Boys who aren’t trying to get laid yet.  If you have one of these in your household, then this is a good game to forestall that hellish part of their life (also known medically as “The Rest of Their Life”) for another month or so.  If you don’t fall into this group though, Bakugan isn’t worth its price tag.  Just plow through the game in a quick renting if you think it’s your cup of tea.

Bakugan is available on the Wii, DS, Xbox 360, Playstation 3 and Playstation 2. A copy of this game was given to us by the publisher for reviewing purposes.