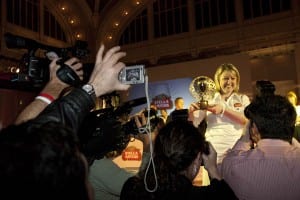 Avril Maxwell of New Zealand won the competition, now in its 13th year, and will now embark on a journey to more than 20 different countries as a Stella Artois ambassador, guaranteeing that every chalice of Stella Artois is poured properly and served just right.

The competition included a jury panel to select individuals who could display true dedication and perfection in the “Passion Test”, and saw contestants from 26 countries, converging in New York to compete for the nine step pouring ritual.

Global Marketing Manager of Stella Artois, Alexander Lambrecht, said: “The World Draught Master competition is integral to our ongoing quest to deliver superior beer experiences the world over, ensuring that Stella Artois is served with the same care, consideration and craftsmanship as has gone into more than 600 years of brewing…we (also) wanted to create a global conversation about the Stella Artois World Draught Master competition by inviting people into the event via live streaming and providing an opportunity for them to decide on what competitor embodied perfection.”